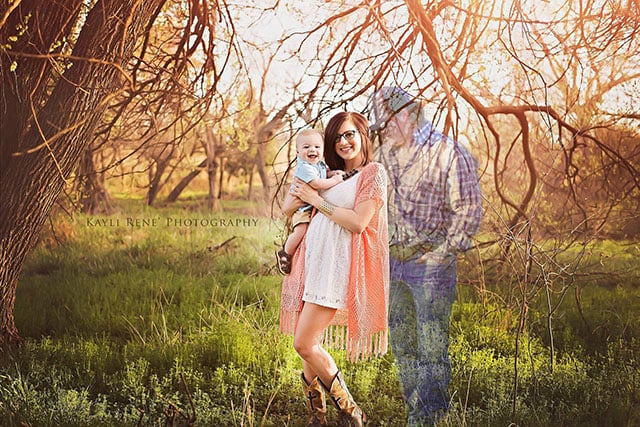 Photographer Kayli Rene has captured quite a few family portraits for clients, but a somewhat unusual one has captured the world’s attention. It’s a photo she made recently for Sierra Sharry, the mother of a 6 month old boy who lost her husband in an accident last year. At Sharry’s request, Rene included the husband as a ghostly figure in the shot.

The resulting photo (shown above) has seen been “liked” by hundreds of thousands of people and has been featured on news shows and websites across the country.


Sierra Sharry and her late husband Lane found out they were having a baby in early 2014. In early July, when Sierra was 8 months pregnant, she got a call from a friend with bad news: Lane had fallen on his head and had been taken to a hospital in Oklahoma City to be checked out.

After arriving at the hospital, Sierra was told horrible news: there was no hope Lane would survive due to the severity of the injury to his head. He passed away on July 13th, 2014.

“[It] was the absolute worst day of my life,” Sierra writes. “I lost my best friend. The father of my unborn child. And since that day I have felt so empty inside. A part of me will forever be missing. I loved that man more than life itself.”

So, when she recently enlisted the services of Kayli for a family portrait when her son, Taos, turned 6 months old, Sierra asked Kayli if she could somehow include Lane in their family photo. Kayli obliged.

“Thanks to Kayli I now have a picture of my little family. It brought me to tears as I know it will many of y’all,” Sierra writes. “This is how I picture us. Taos and I living our lives the best we can with Lane ALWAYS watching over our shoulder.”

“He is watching out for his little boy better than anyone and i know he’s got to be so proud. I love my little family sooooo much and I’m proud to be the mother to Lanes little boy.”

After this photograph went viral, Kayli has begun receiving similar requests from people all over the United States who wish to have memories of loved ones included in their family portraits.

Image credits: Photograph by Kayli Rene and used with permission