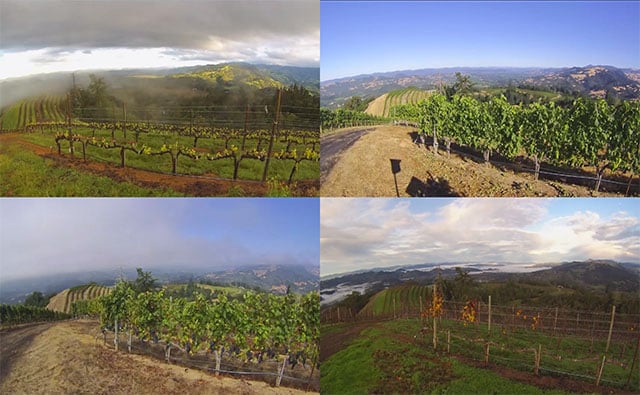 At the end of 2013, I was talking to my client at Ferrari Carano Vineyards about capturing the vineyards and we thought making a timelapse of the entire growing season could be a fun project. I hadn’t done one before, so of course I had to some research before we could start the project. This was one of those projects where everything that could go wrong did go wrong.


We discussed building a small shed to house a regular camera with an interval timer to create an exposure every minute, but decided the elements would be too rough on a standard DSLR, not to mention the cost of the camera and lens was a bit high.

Then I found a timelapse camera online that ran on 2 AA batteries and convinced my client to buy it for $500. I wish I had read more about this camera, because after setting it up and capturing images for a week, I realized it was absolutely not up to the task. The resolution was horrible.

In the meantime, my client and I went up to scout the perfect place for a camera and the vineyard shop manager figured out how we could mount the camera. They cemented a pole in the ground with a platform on top for the camera and a shield over the camera to prevent the hot rays of the sun and the rain from hitting the camera. He suggested I use a GoPro. I didn’t know GoPro’s could make timelapses, so I went off to the camera store and after an hour of discussion with them determined which GoPro to get and how many memory cards we would need for the project.

They sold me a solar panel kit to run the GoPro. The solar kit was not up to the task and the shop manager figured we should rig a car battery to power the go pro and set up a solar panel to have it run continuously. The solar panel he used wasn’t big enough, so in the end we would head up to the site every 10 days to change the memory card (64 gigabyte) and bring a freshly charged car battery to swap out. Mind you this took about 6 weeks to accomplish and numerous visits to the site.

Finally we had the GoPro Hero 3 up and running by March 1. It was set to take an exposure every minute day and night. Every 10 days my daughter ‘Zandra’ would drive the 2 hour round trip to change out the battery and memory card with the help of the vineyard workers. This was a very remote location and she had to be driven to the site by one of the guys.

I would download the images and archive them and do a quick run through to delete all the nighttime images and save them in folders organized by day. We let the camera run at 1 frame per minute for 12 months. The number of images was staggering. 1440 images per day, a grand total of 525,600. I knew that when the time came to sort through all of the images for the final timelapse that I would be logging many many hours.

We finally had a deadline and I had all the images in the folders and then I set about the task of determining which images to use from each day and how many I would need from each day. I settled on 15 images per day and came up with a general plan of having springtime be morning like, summer midday and the fall would end up in the evening. Mother nature is uncontrollable so I had to revise my plan some but in the end I feel that I captured the variety of weather and the progression of the growing season.

Here’s the video. I had to keep distilling it down and shortening it so that it would flow for only two and a half minutes and would sync to the music. I ended up using every third or fourth day as it would have been too long otherwise. It helps that I had a really great client who trusted me and had the budget to hang in there for a year while we captured all the images.

All told I spent about 30 hours editing this project. I sure learned a lot, especially everything that can go wrong on something like this, but in the end the client loved what I did and I was really pleased with the final product. Enjoy!

About the author: M. J. Wickham is a professional lifestyle and product photographer and videographer based in Santa Rosa, CA, and offering her services to California’s wine country. You can visit her website here. This article originally appeared here.