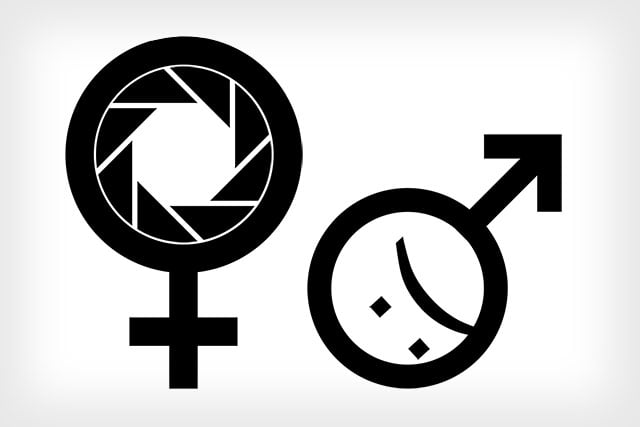 By naming it that, I felt they had downplayed the seriousness and professionalism of their chosen profession. They seemed to have devalued themselves from “professional photographers” to, well… “Chicks Who Click.”

A few years later, I was at a national convention and met a woman who handed me her business card. On it was the name of a photography group she’d founded: “Women Only Workshops, She’fari Photographers.”

Yep, she was very proud of the group and said business couldn’t be better. Of course, I, possessing the wrong genitalia, was not allowed to attend any of her workshops or go on any “She’faris” so I’m not quite sure why she even bothered to give me her business card unless it was just to rub it in. She seemed very nice, so I doubt she meant it as an insult, but still. Helloooo? Common sense???

About the same time, a few others started popping up… “Clickin’ Moms,” “Momtogs,” “Confidence Workshops for Women,” and many, many more. Some of these groups were never meant to be anything more than a social group with cameras. Harmless enough, I suppose, but others were targeting professionals, or more accurately, aspiring professionals, which is where I began to scratch my head.

Is there something I’m missing? (Besides the obvious, of course). Are there dials on my camera that only those with female genitalia are capable of operating? Does my possession of a male organ prohibit my ability to adjust my f/stop or something? Please. I want to know.

So here we are, many years into the digital era, and the industry has evolved from old men to young women. No longer are the females among us a “protected minority.” They are clearly the majority and the trend-setters of photography. They are the leaders of our profession, of our industry. And yet, these “female only” photography groups not only still exist, they’re growing. And it boggles my mind that they are STILL giving themselves “cutesy names.”

And I know I’m not alone. Many women I’ve spoken to feel the same way. My good friend Missy Mwac put it very eloquently when she said:

I think “men only” photography groups are just wrong. I don’t think it’s right to exclude a group of people simply because of their gender. I mean we are all photographers, many of us are parents, and we all face the same problems. Yes, men only groups are wrong. And everyone in my WOMEN only photography group feels the same way. xoxo

It’s time to grow up and behave like true businesswomen. If you’ve got a business name, take yourself seriously. Get out of the kiddie pool and swim with the grownups. The deep end of the big pool doesn’t care what your gender is, only that you can swim.

And if you’re running a gender-based photography group, you’re not doing the profession any favors, so stop targeting those who aspire to be serious professionals. Professional cameras don’t have gender buttons.

About the author: Kevin E. Newsome, Tampa, Florida, along with his wife, Kaye (also a photographer) has owned and operated Newsome’s Studio of Photography since 1986. His opinions are legally his own. You can find his photography and his writing on his website and blog. This article originally appeared here.

Flickr is Rolling Out a More Powerful Search Engine with New Filters, Users, and Groups