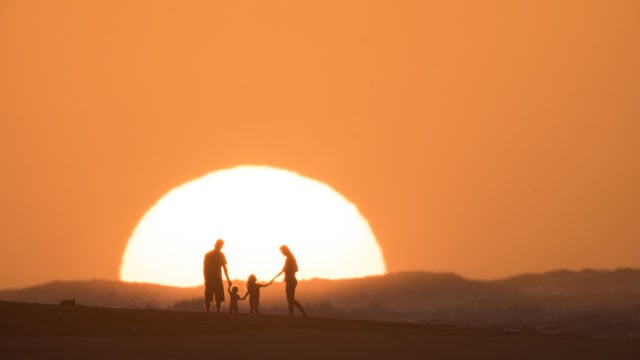 Growing up in a surfing family in Hawaii, The Endless Summer was a rite of passage. As a young boy, not only did that surf film give me a love of the ocean and adventure, the image of the cover was burned into my memory (Even Vanity Fair applauds the world renowned portrait).

The iconic shot contains a dramatic composition of the setting sun with the movie’s surfers, Mike Hynson and Robert August, and the film maker, Bruce Brown, in the foreground. That image was a source of inspiration for my surfing lifestyle, but more recently, an inspiration for my photography and cinematography. 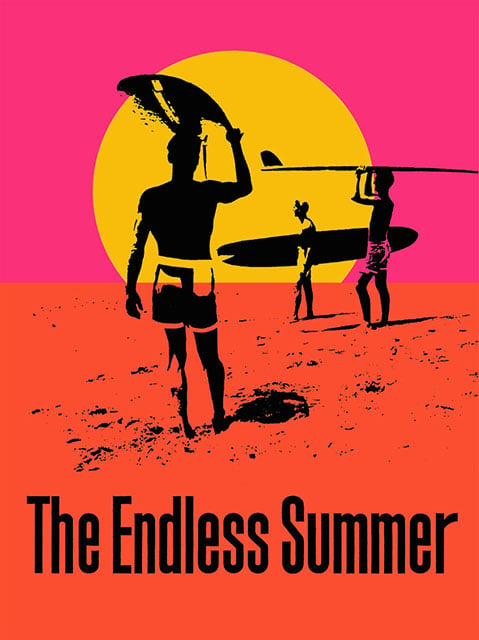 I wanted to recreate that classic “Endless Summer” image, but also add my creative expression to it. I knew my 70-200mm lens wouldn’t cut it, so I reached out to the team at Lens Pro To Go and rented a lens that might make this idea possible: the Canon 800mm f/5.6. It was a little humorous because they seemed a little reluctant to lend me their most expensive lens.

I had rented the lens for two weeks and knew I had to take full advantage of it. Prior to receiving it, I had to do some research to know where on the horizon the sun would be setting, the position the camera would need to be and where the subject would have to be located relative to the setting sun and the camera. So I grabbed my 70-200mm f/2.8 and 2X teleconverter and went to the coastline.

My supportive, but hesitant wife even walked up big, sharp lava rocks with our oldest son to assist in this process. We did capture some amazing images in this scouting process. This particular day with my wife and son was extra special because about 75 yards off shore there was a humpback whale and her calf swimming in the Pacific. 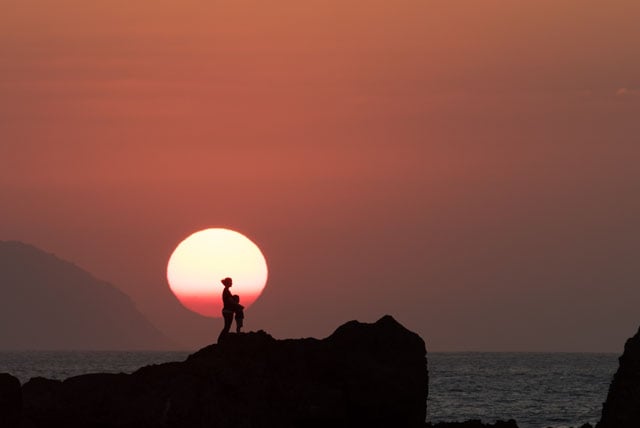 In Hawaii we have this natural phenomenon known as “vog.” When our usual breezy trade winds stop, we often get the fumes from the active volcanos on the Big Island leaving the island chain hot, humid, and hazy causing a lot of local’s allergies to go crazy. However, when there are no trade winds to blow away the haze, it results in very dramatic sunsets. Thankfully, the first few days I rented the lens, there were amazing, voggy sunsets. 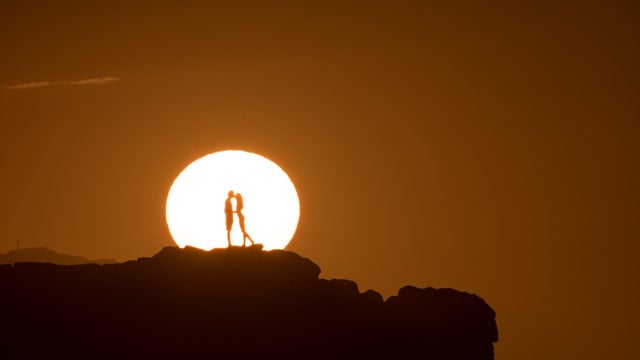 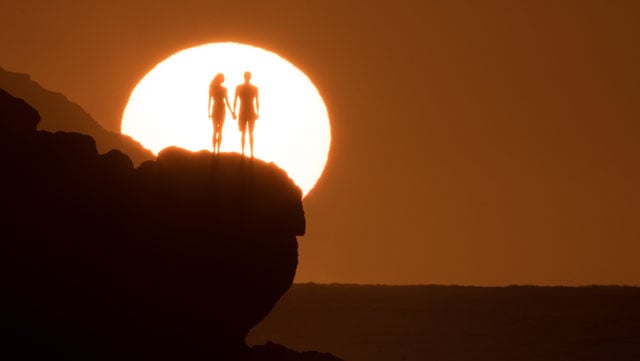 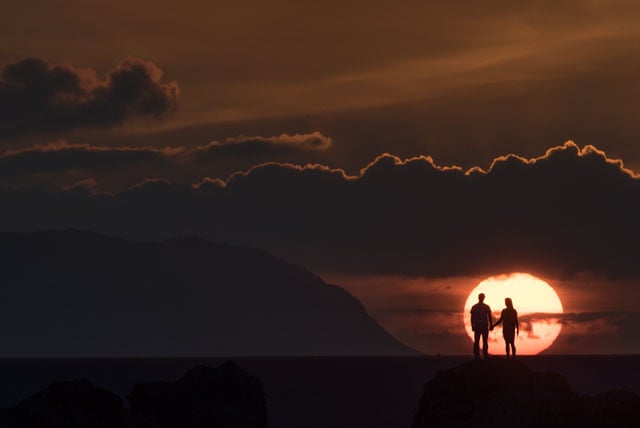 These sunset shoots were literally months in the making. I had to keep a close eye on the sunset time, but more importantly the sunset location. The only way the 800mm focal length could be advantageous hinged on the location the subject was positioned; the distance, the elevation, and the general surroundings.

Moreover, there are only a couple of locations that created that ideal position. One location I used (ie., images of Brooke with her longboard) created a 2000-foot distance between the camera and the subject. That created for a very dramatic image, but there were a many failed attempts because of variables out of my control: people walking in the shot, too much debris in the air causing a softer image, and the low elevation of the subject which created a very short window for the shot. 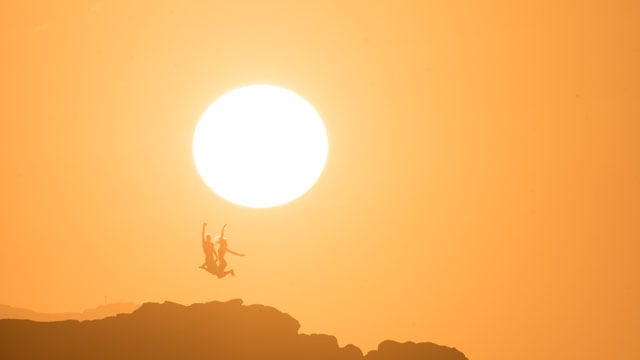 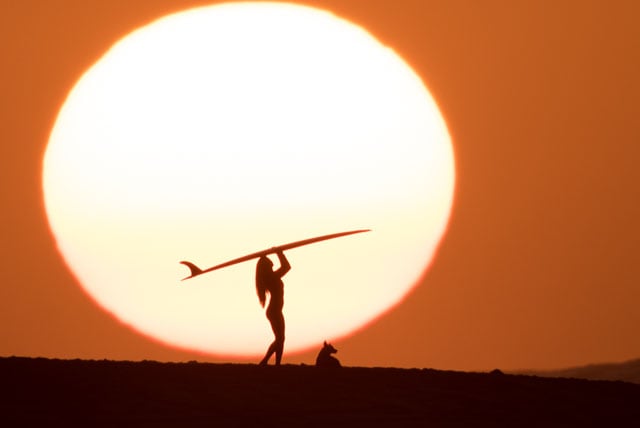 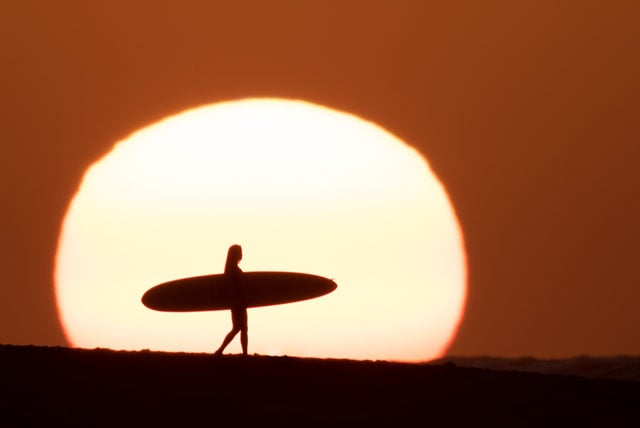 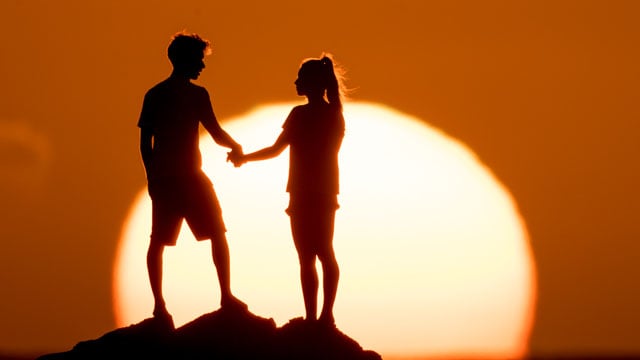 Not only was subject position of extreme importance, but the weather was the biggest factor. There were just as many successful shoots as failed attempts. For these particular sunset shots, there couldn’t be any clouds on the horizon.

A few times it looked like that the weather was going to cooperate so I got the camera set up, people in place, and as soon as the sun was coming into the proper composition, it hit a low layer of clouds and the shoot was ruined. It was a bummer, but also part of the journey. The times the shot came out, it made it well worth all time and effort put into the failed attempts. The mythical and mysterious “green flash” was proven true. In this above shot, you can see the green starting to form. The last shot in this video you can definitely see the green flash in real time:

Overall, I am stoked with the images that were captured. The gear I used included a Sony A7s with metabones adaptor, Canon 800mm f/5.6, Canon 70-200mm f/2.8, and Canon x2 Teleconverter. The video was edited in Final Cut Pro X (FCPX).

About the author: Aaron Eveland is a photographer and cinematographer who offers his services through his wedding photography and videography business Makai Creative. They chase light and tell stories for clients in Hawaii. This article originally appeared here.