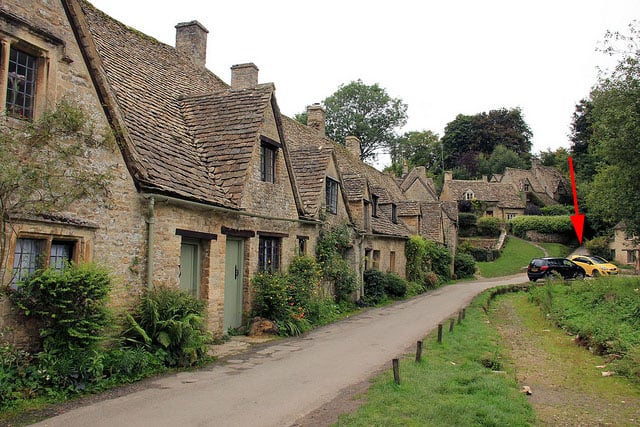 Bibury is a Cotswolds village in England that’s famous for its picturesque stone cottages that are the subject of many a photographer’s photos. Lately, however, photographers are complaining about their photos being ruined by an “ugly, yellow car” that’s often parked in the area — a car owned by one of the residents.

One of Britain's most picturesque villages has been blighted – by a photo-bombing yellow car http://t.co/6deCIluTDu pic.twitter.com/oA1hRKi6i2

The Telegraph reports that the vehicle is owned by an 82-year-old retired dentist named Peter Maddox, a resident of one of the cottages for the past 12 years. Maddox says he doesn’t have anywhere else he can park since he doesn’t have a garage.

Controversy about his car was sparked recently after photographer Lee McCallum of Kooky Cotswold Tours pointed it out on Twitter:

Bibury's elephant in the room. The picture postcard street photobombed by the ugly little yellow car – every day. pic.twitter.com/As3dVq3PE3

After people began defending Maddox, McCallum tried to make it clear that he was personally fine with the car:

@benakt indeed Ben. I'm in favour of the car. I certainly don't want him to move it. Better picture with the car in it!

Another photographer named Robin Lawrence had this complaint for The Telegraph: “That flipping yellow car! You have an area of outstanding beauty and as a photographer, you are hampered by the car. It gets in the way of photographs. I have cursed the yellow car today.”

The paper quotes another photographer from the village, Mike Fletcher, as saying: “Arlington Row is the most photographed cluster of English cottages in the world so the owner of the bright yellow car either hasn’t registered that it’s probably causing a lot of extra work on photoshop to take it out, or simply doesn’t care.”

Other residents of the area have begun speaking out in Maddox’s defense, saying that the elderly man has every right to park at his home, and that the tourists and photographers will simply have to live with the “ugly” yellow car.

Demo: How to Use a Yongnuo Wireless Trigger with a Group of 600EX Flashes