If you want to see the mechanics of how a modern DSLR shutter works, one way to do so is through slow-motion captured with a high-speed camera. That’s what Gavin Free of The Slow Mo Guys recently did by pointing a Phantom Flex at his Canon 7D and capturing what goes on inside the mirror box during exposures of various shutter speeds.

By slowing down the movements after shooting at up to 10,000 frames per second, we get to see exactly what goes on in the camera in the blink of an eye.

Viewed side-by-side, we see the gaps of various sizes in the rolling shutter that expose the CMOS sensor for different amounts of time (i.e. different shutter speeds): 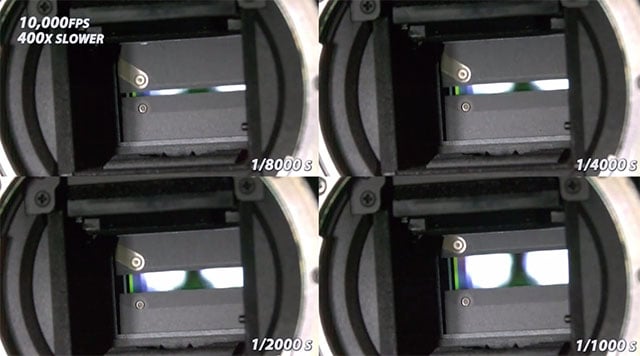 Gavin also shows the effects of the rolling shutter in DSLRs by comparing the footage with the global shutter in the Phantom Flex.

‘Photographs’: A Touching Animated Short About an Old Lady and a Polaroid Camera