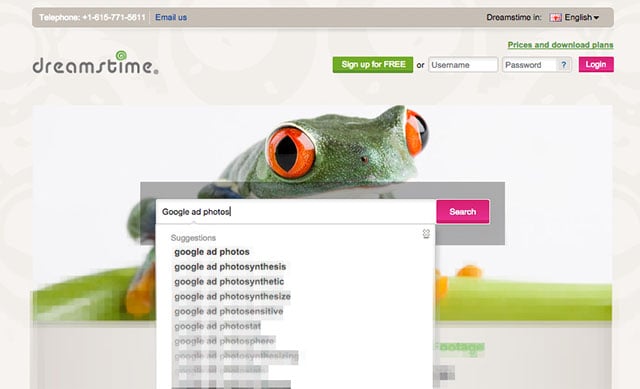 Stock photo service Dreamstime announced today that it has been selected as a “beta provider of stock photos for Google display ads.” Through the agreement, Dreamstime contributors are initially paid roughly $2 per image for use in Google’s ad network. Some photographers aren’t too happy about the terms of the new arrangement.

In addition to sending out emails to its users with the news, founder Serban Enache broke the news in the company’s online forum. Here’s an excerpt:

The details of the program that we can share with you at this time are that Google has selected a large number of images from our collection for use in display ads: Google will be able to use pre-selected Dreamstime RF images only for ads, and in limited sizes to accommodate ads. During the beta period, images will not be available in a template library. These images will be used under the Royalty Free license in a beta for the next 12 months, and contributors will receive royalties soon. The royalties for the first 12 months will be based on our all-at-once subscriptions – i.e., $2.00 (non exclusive) and $2.20 (exclusive) per image.

As we do with other initiatives, Dreamstime supports the volume discounts and we expect to at least double our regular royalty rate. The volume discount also reflects the use case, since these images will be used in limited-sized ads and not in more prominent uses.

Enache goes on to say that photographers who do not wish to participate can opt out anytime before January 31st, 2015 by leaving the “Alliances program” through their account management page. 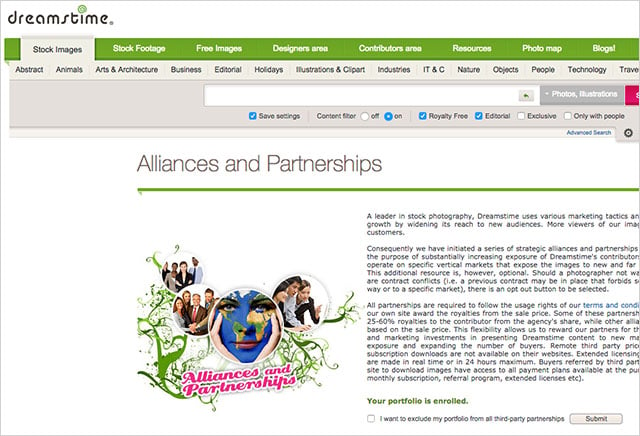 Community opinion appears to be divided. Some photographers are enthusiastic about the deal:

This is outstanding for Dreamstime, and hopefully will trickle down to a good number of your contributors as well.

Sounds like great news and just what we need!

You can always opt out if you don’t like it (what i fully respect) but i really don’t see why you should block extra income. Yes it is 2 dollars. It can be 20 times 2 dollars. If you opt out you will have this money less in your account. If Google clients will not get your image they will get it from an other contributor that is opted in.

…while other photographers are arguing that their compensation is unreasonably low:

So for me the “$2 for unlimited users” right now is not all that exciting. The secret of microstock in my opinion was in the “each new use is a new sale” approach. Low royalties in exchange for lots of sales. Only one low royalty for a multitude of sales is not what pays the bills. It’s obviously different for someone who sells tens of thousand licenses in a single day, the agency.

I get the idea that they pay in advance even if no Google customer selects one of the images, but if an image is used a lot, it seems as if that contributor has gotten a rather poor payment for so many uses by so many Google customers.

In response to the complaints, Dreamtime employee Malina Tudoroiu points out that the deal is in line with others that Dreamstime has done. “There’s nothing unusual in this deal, except of course for the famous name and, most of all, for the big opportunity this partnership brings to all,” she writes.

The deal is reminiscent of the partnership between Google and Getty Images that was announced back in 2013, which also caused quite a bit of discussion (and grumbling) among stock photographers.

Photos of Retired Subway Cars Being Dumped Into the Atlantic Ocean

Want to See Your Photos Used on Book Covers? Here’s How I Did It