Using super-telephoto lenses to frame people against the rising moon has become quite popular as of late. Just last year we shared examples featuring people at a lookout, a high-line walker, and a mountain biker.

Photographer Göran Strand recently decided to take the idea a bit further by framing his subjects against the sun.

The Swedish astrophotographer — whose work we’ve shared several times in the past — tells us that the idea of working with silhouettes against the solar disc at sunset had been bouncing around in his head for quite some time. This past October, he finally had a chance to attempt it.

Strand first spent a good amount of time hunting for the perfect spot. “I wanted a hill clear of any big trees and buildings and with an even surface so that the action would be clearly visible and the actors easily could move around,” he says.

Once he found the right hill, he called up a couple of his buddies who are trained amateur stuntmen. He put swords in their hands and had them create some “theatrical action” on the hill while Strand pointed his telephoto lens at them from some distance away.

The video above is what resulted. Here are some still frames from it: 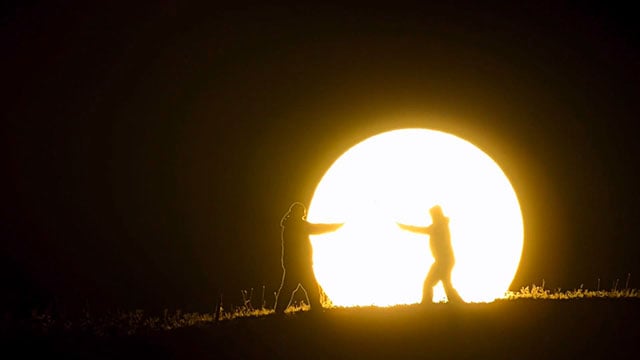 Strand particularly likes the moment at the 1:30 mark, in which one of the actor’s breaths is backlit by the sun.