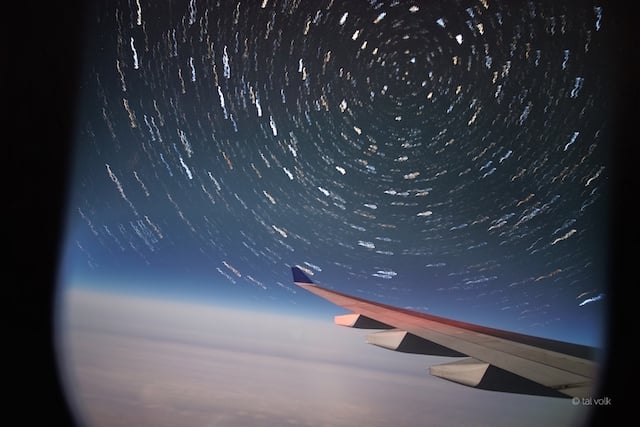 Here’s an interesting idea for the next time you find yourself stuck on a long, overnight flight. If you don’t have the opportunity to capture the Aurora Borealis, try to capture star trails instead.

The photo above, captured by photographer Tal Volk on a flight back to the US from SE Asia, seems to show that this is indeed possible… if a bit difficult. Of course, this isn’t made from a single photo. Here’s what Volk told us about how he captured/created the image:

This shot is made of a few hundred pictures taken over the course of a few hours. I had to cram my body against the camera and a blanket to both stabilize it and prevent reflections from the cabin light. Editing was also a pain as the plane experienced turbulence and altitude shifts.

The other challenge was that the position of Polaris (the North Star) changed throughout the flight, so the image you see above highlights just one section of the flight. And once he had all his photos, he had to pick the best ones, edit, and stack.

The final product came out a bit… painterly, but that could be seen as a good thing. Let us know if you’ve seen something like this before, and if you give it a shot yourself, be sure to drop a link in the comments!

Image credits: Photograph by Tal Volk and used with permission

A Simple Explanation of the Optics Behind Pinholes, Camera Apertures, and Your Eye

Tutorial: A Much More Effective Way to Correct for Distortion in a Fisheye Photograph