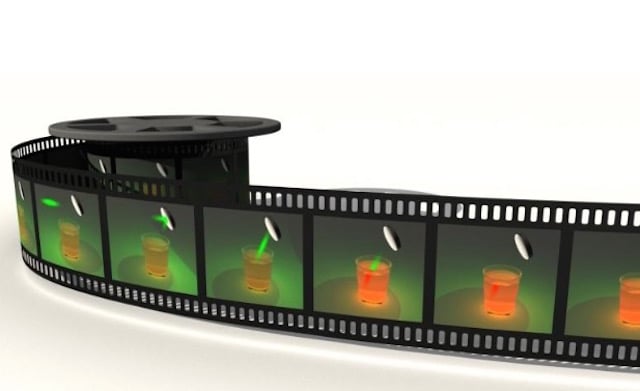 Biomedical researchers at the University of Washington have created what they claim to be the world’s fastest 2D ‘receive-only’ camera. Just how fast exactly? Up to 100 billion frames per second with the help of a technological process called Compressed Ultrafast Photography.

This allows the scientists to SEE laser light moving… actually watch it move… think about that for a second (or 100 billion frames).

As they currently stand, receive-only cameras are capable of capturing roughly 10 million frames per second, limited due to on-chip storage and the bandwidth of readout speeds. This new technique bypasses those restrictions, thanks in part to advancements and expansion in an existing technology called streak cameras, which captures variation in light pulses over time.

Whereas streak cameras are only capable of recording in a single dimension, though, study leader Lihong Wang, PhD and his team have combined algorithms and a clever array of microscopes and telescopes to capture two-dimensions of info.

Here are images captured using the camera, showing laser light reflecting off of a mirror or moving from air to resin:

The inner workings of the camera are complex… which is a serious understatement. First, the lens captures the photons of light, shooting them through a tube to a digital micromirror device. Using roughly a million 7×7 micron (μm) micromirrors, the signal is encoded before being sent through a beam splitter, which fires off the photons to the streak camera.

Those photons then get turned into electrons before being ‘sheared’ by two electrodes — meaning the electrodes apply varying voltage, so the electrons arrive at different times and vertical positions. This effectively turns time into space — there’s your second dimension.

Finally, all of that information is captured by a CCD that passes it along to a computer where it’s processed into an image using computational imaging.

And all of that… happens in 5 billionths of a second, or 5 nanoseconds.

The technology is currently planned to be used in biomedicine, but its reach goes far beyond the niche it was developed for. Wang even went so far as to say that this technology could be used in Hubble in the future.

To read the full study, with all technical jargon and complex details intact, head over to Nature.