Long before high-sync speedlights were ever a thing, there was a bleeding-edge technology that forever changed the way people photographed subjects. It was called magnesium flash powder.

We’ve seen it in old noir and western films, but today we have for you a video that brings it into the modern era, pitting the age-old technology against a standard electronic flash to see how they compare.

The eight minute video was dug up by our friends at The Phoblographer, and it highlights the basic principles of flash powder, followed by a demonstration and comparison of how flash powder photography stands up against a speedlight in a non-scientific head-to-head comparison. 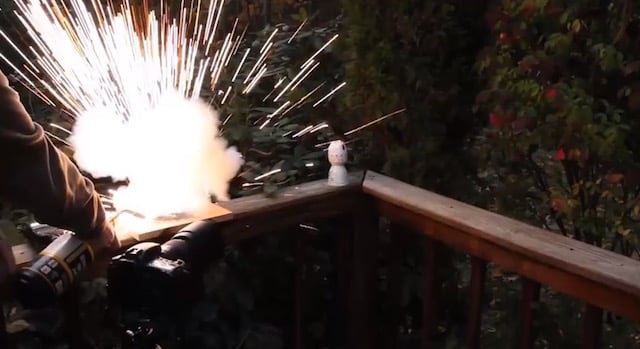 As the video shows, flash powder is far from convenient, giving off a great deal of heat and sparks (read: dangerous), as well as leaving behind a massive plume of smoke that you certainly wouldn’t want lingering around inside of a studio.

Despite its negatives though, the flash powder does deliver a… well… bang, putting out far more light than a speedlight at full power assuming you’ve used enough.

While it’s probably for the best that flash powder is no longer used, it’d be interesting to see it in action in a modern day photo shoot with firemen in attendance and plenty of safety precautions taken. Just don’t take it to a Ryan Adams concert.