If you ever find yourself as close to a wild bear as Drew Hamilton is in the video above, you’re probably a little too close. Hamilton, a photographer and technician with the Alaska Department of Fish and Game, captured the amazing footage while sitting with his camera on the bank of the McNeil River in Alaska. The bear simply strolled up and took a breather just several feet away from where Hamilton was sitting and snapping. 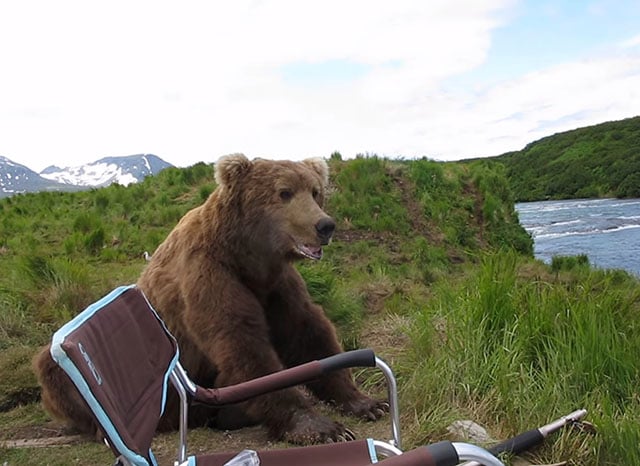 Under most circumstances, what you see in the footage would be an example of what NOT to do while photographing bears in the wild. In this case, however, Hamilton knew was he was doing and felt perfectly comfortable with the bear at arm’s reach.

The area at McNeil River is actually home to the largest seasonal get-together of brown bears anywhere on Earth — up to 74 have been spotted in the area at one time. For decades now, photographers and outdoorsy folk have been visiting the McNeil River State Game Sanctuary in order to get up close and personal with wild bears.

The bears have become quite accustomed to going about their business with humans sharing their space, and thus the location is very safe for human visitors. No one has ever been injured by a bear in the sanctuary.

Unfortunately, getting access to the magical photo-op spot isn’t very easy — in fact, it’s extremely difficult. Due to the extremely high demand (thousands of applications per year), permits to access the spot are only handed out via a lottery. Only 10 visitors are allowed per day for a 4-day period while the bears are feeding. “[…] photographing giant brown bears at such close range is an once-in-a-lifetime experience,” the sanctuary says.

If you’d like to try your luck at snagging a permit, you can do so through the Alaska Department of Fish and Game website. Unless you do hit the jackpot with the permit, you should continue to stay at a very safe distance from bears (and obey the US Forest Service in not taking selfies with them).

PSA: Some iPhone 6 Plus Users are Getting Very Blurry Photos and Video Even When Standing Still