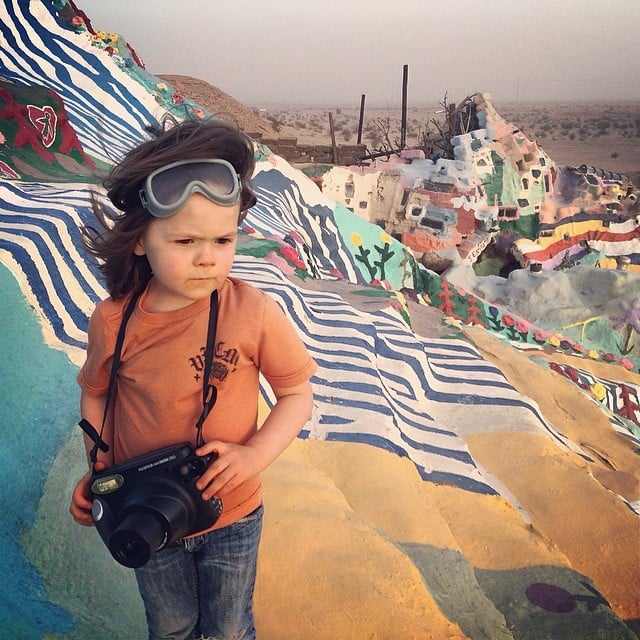 There’s an intensity on Hawkeye Huey‘s face as he looks out from Salvation Mountain in California, Fujifilm Instax 210 in hand, goggles askew on his forehead, eyes searching the horizon for the next exposure. It’s the kind of intensity typified by at least two kinds of people: 4-year-olds and National Geographic photographers.

Which makes sense, since Hawkeye is the first, and his father, celebrated photographer Aaron Huey, is the second.

Aaron introduced his son to photography during a road trip a little over 6 months ago, and it had less to do with sharing his love of photos with his son as it did about father/son bonding.

“I thought it would be fun to see if we could both do something on a road trip that I would also enjoy, I wanted it to be art based, and since I am looking through a camera so often that seemed a good vehicle for collaborative exploration,” Aaron told us yesterday. “Our first with cameras, into the desert, was not about photography, it was about connecting as a father and son.”

Huey senior posted the top photo of Hawkeye on his Instagram account and the response was immediate: people wanted to see Huey junior’s work. Not wanting to fill his own Instagram with Hawkeye’s photos, Aaron started an account for his son and gave the people what they wanted.

And want it they did: as of this writing, Hawkeye has over 42,500 followers with no sign that the growth will slow.

Since Aaron can’t take Hawkeye with him on real assignments for Nat Geo, he’s been creating ‘assignments’ that are just for him.

His first shoot was at a place called Slab City, “a kind of squatters camp in Southern California” that Aaron describes as, “a rugged place and made for great portraits.”

“We hung out with “circus kids” and vagabonds. Travelers of all kinds,” he tells us. “It was great for Hawkeye to meet these people and see another way of living.”

Next up was a Rodeo, where Hawkeye was able to capture candid behind the scenes photos of contestants getting ready, preparing to ride bull, and getting into the chutes. Through it all Aaron keeps a very close eye on Hawkeye to make sure that he stays safe.

The way Aaron sees it, his job is simply to guide Hawkeye and try to help him express himself unfettered.

“I just try to keep him within range of subjects, and ask him to try different angles. I encourage him to get close to people,” says Aaron. “He often tells them to be ‘relaxed and natural,’ which he heard from me the first time I helped him at Slab City. Since he is 4 I also have to make sure the focal length is set (there are two modes).”

But this isn’t about making sure his son gets an early start as a professional photographer. In fact, Aaron was keen to let us know that this isn’t the point at all.

“Im not attached to him being into photography,” he says. “I just want him to keep making and evolving. That would make me very happy.”

Oh, and in case you were wondering, yes he does shake the picture back and forth every time it prints. He doesn’t have to, obviously, but Aaron jokingly told him to the first time a picture printed out, and Hawkeye took the advice to heart.

Here are a few of Hawkeye’s photographs, properly shaken:

Before we let Aaron go, we asked him if there were any anecdotes from these assignments that he’d like to recount for us. Here’s what he shared:

When we were at the open mic night at Slab City, I sat on the ground and watched Hawkeye go around meeting people and taking pictures, he was wearing a Star Wars X-wing fighter suit with a HUGE camera and goggles on his head, and by the end of the night everyone knew his name. I love to watch him run around showing people his photos, and I love that they are physical objects not just digital files in an iPhone. That part is important for me, and worth spending the money on real film. It turns each photo into a genuine interaction, into a conversation. Everyone is smiling when Hawkeye walks away.

Ultimately, Aaron hopes that this early exposure to photography will continue to expand Hawkeye’s horizons. He’s already a “very social little guy,” says Aaron, “[but] photographing people in this way opens him up to a lifetime of communicating with people who are different than him.”

“I think so many people get locked into a comfort zone with how we see the world and who we interact with, and we do that by limiting our exposure,” he continues. “Photography is one way for me to shatter that comfort zone, to be reminded every day that I go out with my camera, that there are infinite worlds to explore — that I am not the center of the universe, and that my ideas are among the many perspectives and manifestations of life that make up this world.”

“I hope for nothing less for my son, whether it is through photography or another medium of communication.”

Diving Into the Numbers: Is the Canon 7D Mark II as Bad as DxOMark Says it Is?