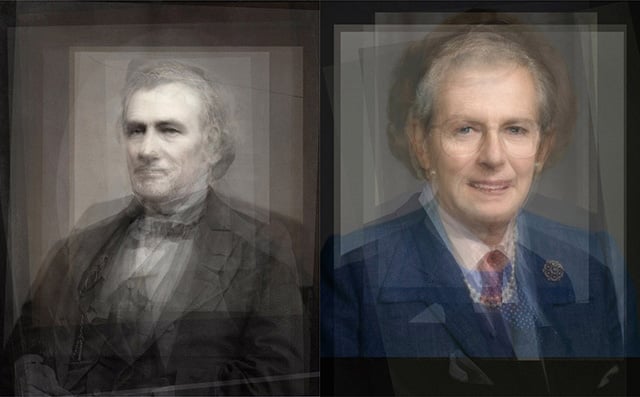 There is a specific composition to ‘portraits of power.’ Almost without exception — no matter the country or year, even if the medium was paint and not light — every leader stares out of a frame with a look of seriousness on their face, seated just so, emanating the power and authority granted or given them.

Each image in the series is constructed by overlapping anywhere between 4 and 40 portraits of world leaders from a certain country and time period. Early American presidents and late American presidents, British Prime Ministers, Finnish Presidents and “Supreme Leaders” of North Korea all blend together into composites that each say something about the nations at whose helm these people sat.

The images also say something about photography and its relationship to power. Body positioning, head positioning, and basic composition vary very little even between countries, indicating that there is a certain ‘composition of power’ that has remained the same over the years.

But beyond that, photography also acts as a great equalizer. As photography critic Vicki Goldberg explained in her analysis of these images:

Abraham Lincoln has disappeared beneath his predecessors and successors, Benito Juarez beneath his. More startling is that Stalin, who himself had many important men wiped out both from life and from the photographic record, has morphed clean out of recognizable existence in this throng, and Mao, whose image reigns eternal in Tiananmen Square, vanishes altogether. These photographs are time capsules that can only be opened by historians.

To see more of the images from the series, or read Goldberg’s full introduction to the series, be sure to visit Almaraz’s website by clicking here.

Image credits: Photographs by Alejandro Almaraz and used with permission

Nikon Scores Another DxOMark Hit with the D750, Its 6th Camera to Make the Top 10