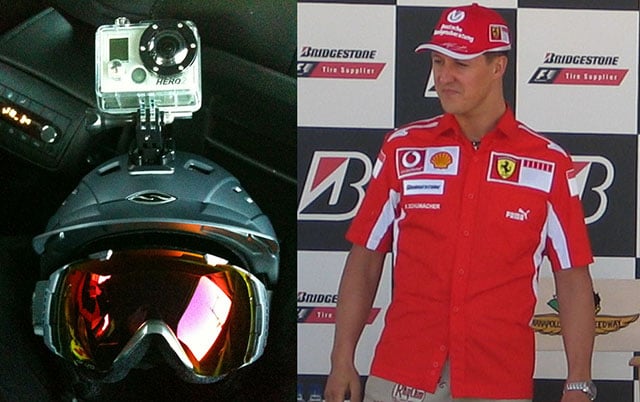 Formula 1 racing legend Michael Schumacher is still making his slow recovery from a serious skiing accident he suffered on December 29th, 2013. While skiing through an unsecured area in the French Alps, Schumacher crashed and slammed his head into a rock.

Doctors credit his helmet with saving his life, saying he likely would have died had he not been wearing one. But this weekend a new fact emerged: the GoPro mounted to his helmet is reportedly what caused the brain damage.

The claim was made by French journalist Jean-Louis Moncet who, after speaking to Schumacher’s son (who was on that skiing trip), went on a radio show and stated that, “The problem for Michael was not the hit, but the mounting of the GoPro camera that he had on his helmet that injured his brain.”

Schumacher still cannot walk or talk, and is rehabilitating with $185,000-per-month care at his home by Lake Geneva. Moncet quotes the son is saying that the driver is “waking up very slowly; very slowly.” Doctors do not yet know how much recovery Schumacher will be able to make.

It is unknown what helmet and mount Schumacher was wearing at the time of the accident and . [Update: See below]

Update: Reader Michael Nemetz points out that investigators were looking into whether or not the helmet cam was at fault not long after the accident. The Telegraph writes,

Experts from ENSA, the world-renowned ski and climbing academy in the French ski resort of Chamonix, have conducted tests to determine whether the presence of a solid object between a helmet colliding with a rock would weaken the structure. […]

“The helmet completely broke. It was in at least two parts. ENSA analysed the piece of the helmet to check the material, and all was OK,” said a source close to the investigation. “But why did it explode on impact? Here the camera comes into question. The laboratory has been testing to see if the camera weakened the structure.”

If Moncet is correct, then researchers in this case reached some conclusions that place blame on the helmet camera and mount.

Miss World Philippines Portraits: Is This Poor Beauty Retouching or a Cultural Preference?