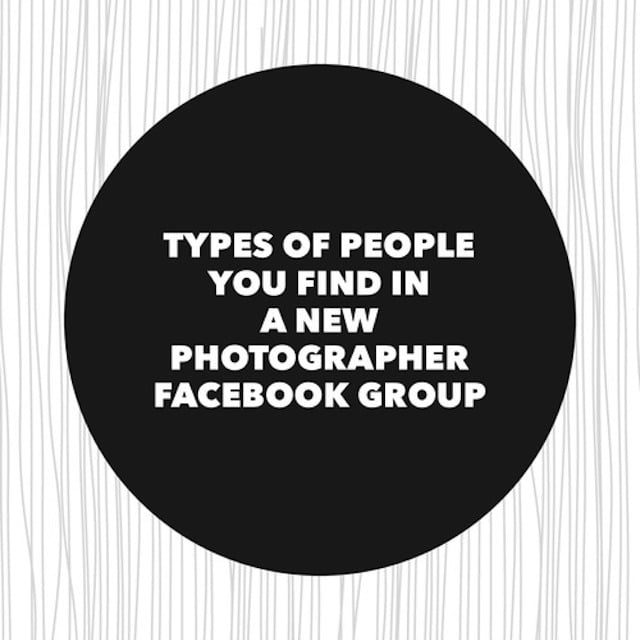 The title kind of says it all, so why don’t we just jump right in? Here are the ten types of people you’ll find in a new photographers Facebook group.

The Expert: This is the photographer so eager to prove that they know all the things, that they jump into almost every thread with their advice. The advice is normally given with all the smoothness of sandpaper. The Expert is the end-all, be-all in his/her opinion and when questioned, will more than likely respond with, “You’re wrong. I’m pretty much always right.”

The Likeaholic: The photographer who will “like” any image uploaded to the Facebook group. Any. Image. It matters not what it looks like. Overexposed, underexposed, out of focus, processed to look like it was left in the back window of a car for 3 months…it doesn’t matter. Likeaholics will often “like” an image because no one else is and they feel sorry for it. They often engage in “Pity Likes.” If you look at an image and say, “How the heck could anyone “like” this?” you can bet it was liked by the Likeaholics.

The Contrarian: The Contrarian is looking for an argument. They feed on it, much like Godzilla monsters and radiation. If you say, “It’s really dark outside at midnight,” they will argue that it’s not dark outside everywhere and that a statement like that proves the ignorance of the person making the comment. The Contrarian is only happy when they are causing problems and even then, they aren’t happy. When unable to summon a logical response, they will normally end the conversation with that classic of comebacks: “You’re stupid.” They also go by the name of “troll.”

The Peacekeeper: The photographer who swoops into a heated thread and says, “Everyone needs to calm down.” Quite often, this advice backfires on the Peacekeeper, as it is often seen as a reprimand and being told to “calm down” is the equivalent of throwing gasoline on a fire.

The Lurker: The Lurkers rarely, if ever, post in a group. They normally content themselves with lurking in the shadows, watching the action. They often turn their “notifications” off, but will wander into the groups when they are bored or are waiting for their Netflix selection to load while editing.

The Post-a-lots: The names of these photographers are easily recognizable, because they post their images at least 3-4x a week. They will show you a color image, and then that same image in black and white later in the day to get the group’s opinion as to which they think is best. They will then crop it differently and post it yet again.

The Disclaimer Critique Seeker: These group members will post to Facebook groups looking for a critique of their work, but only if it’s a nice critique with not much critique. They look for words like, “This is awesome!” and “Beautiful!” and are best friends with the Likeaholics. If someone gives less than positive feedback, the Disclaimer Critique Seekers will quickly remind the group that they are still new at this, despite being open for business.

The “Buy My Workshop”: The Buy-My-Workshop was an Expert who took it to the next logical level. He/she, although very new to the photography business with no track record or experience beyond a couple years…or months, wastes no time in informing the other members that “in response to overwhelming requests, they are considering putting on a workshop.” The Buy-My-Workshop will then go on to appear on creativeLive.

About the author: Missy is a photographer, eater of bacon, drinker of vodka and your guide through the murky waters of professional photography. You can read more of her work on her blog. This article originally appeared here.

Behind the Scenes: Hanging Out of Moving Car Windows to Captured Doggy Euphoria