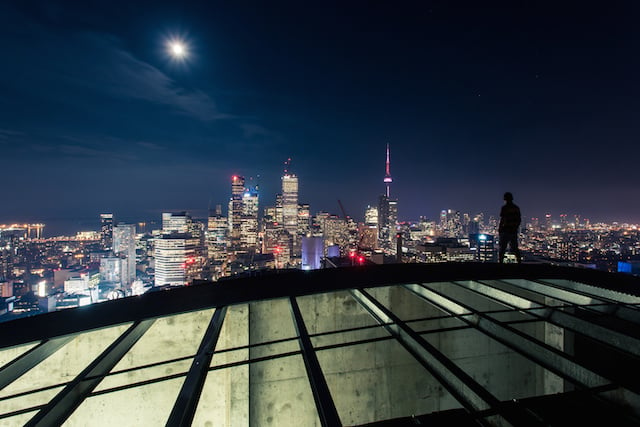 So it has been an amazing run. I owe a lot to my ‘rooftopping’ adventures. I’ve sold prints, had gallery shows, been on TV, in magazines, on the front page of the Toronto Star, and most importantly the rest of my work got more attention as a by-product of it. People really seemed interested – they liked these types of images and the attention was nice. It is hard to turn away the likes and faves. It was addicting to an insecure photographer just starting a new career in photography. Rooftopping was my security blanket.

But as my love for other genres of photography grew, my desire to ‘rooftop’ buildings declined. But the thing is, I was already committed. I was one of those ‘rooftopping guys’. If I ever posted other types of work, I found that less people reacted to them in a positive way. So I continued the vicious cycle of getting on rooftops and posting those images. I grew tired of it. I knew that relying on rooftopping photos the last couples of years has really stifled my creative and artistic growth. It was a crutch in my development as a working photographer and artist.

So over the last couple of years, I gradually eased into semi-retirement. I cut down the amount of time and energy spent on rooftops. I volunteered in Kenya for an amazing charity, I travelled to Vietnam, Cambodia, Mexico, the Netherlands, UAE, and the US. I started a long term project documenting the Alexandra Park Housing Project in Toronto. I gained perspective. I shot different things and I got better. Most importantly, I cared less about what others thought of me and I began to dislike rooftopping. I hated the work I was affiliated with. And for these five reasons, I will tell you why I am f***ing done with it. 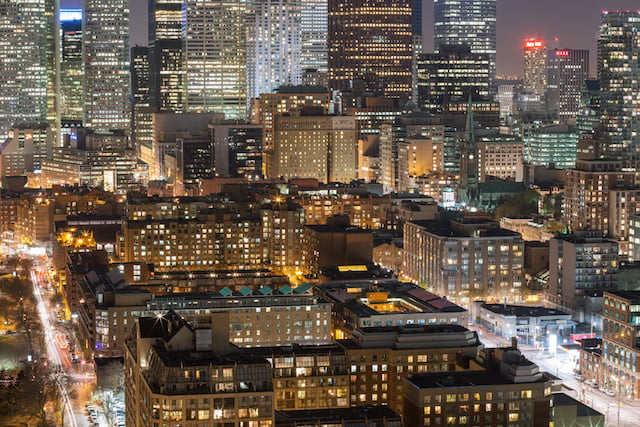 1. It No Longer Feels Like We’re Doing Nothing Wrong

In the beginning, we would simply walk into a building and either take the stairs or elevators to the top and look for an unlocked door or hatch. The majority of times we would fail and move on to the next building. There was a lot of failure. It took a lot of perseverance and repeated location scouting to access certain buildings at optimal times.

But a newer breed of rooftopper in Toronto emerged. The idea was for them to get from 0 to 100 as quickly as possible – without learning how to do it in a way that was respectful. So a hatch has a lock on it? F*** it, they’ll bolt cut it and replace it with their own lock. A door is closed? F*** it, they’ll just crowbar that open. There was no art left in the process. No subtlety. They didn’t realize that their actions were making us all look really bad, not only those who choose to vandalize.

I was always taught to “take only photos, leave only footprints” and when that wasn’t enough or when others associated with what we do started doing stupid s**t, we couldn’t help but be stereotyped with the rest of them. Recently, more and more people have been getting ticketed for trespassing and some have even been charged criminally for possessing tools with the intent of doing whatever the hell they were gonna do. 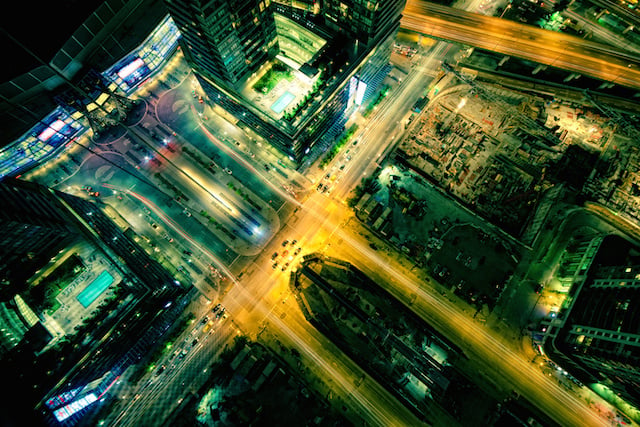 Something fundamentally changed when it became less about just going up and having a good time with friends and more about who can take the photo of the other person in the most precarious situation. Danger sells. There was a market for our images and whoever had the most “vertigo-inducing” photo reigned supreme. It felt too fake, too contrived. It got too competitive for unique rooftops that photographers who were friends kept roof access information from one another so their images would be more exclusive. Rooftoppers began taking the biggest risk-taker rather than their friends. The desire for that “oh so dangerous” photo trumped the desire to be with real friends and as a result I believe some of these friendships have suffered.

In a recent conversation with a friend who is also known for his rooftopping work overseas, he voiced his overwhelming desire to create a video that would go viral, despite him losing passion for it.

Him: “But honestly if I hadn’t been aggressively posting rooftopping photos, I would still have 50 friends on Flickr and I’d be posting street photography that no one will like.”

Him: “Which is what I am starting to realize.”

Despite this, the obsession to gain attention, likes and faves was enough for him to repeat the vicious cycle over again. He wasn’t creating for himself, he was doing it to please others. 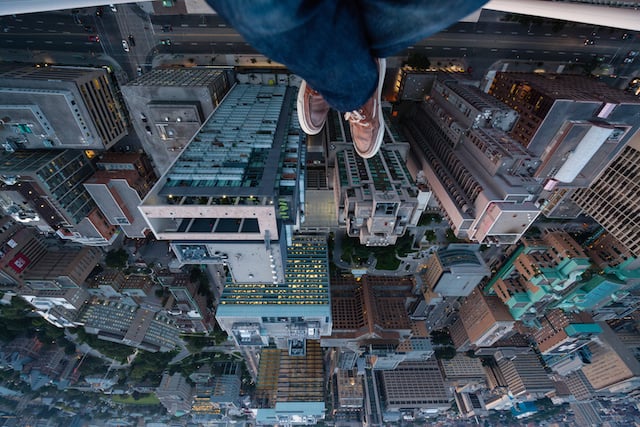 This epidemic of people dangling their feet off of buildings really needs to stop. It’s so unoriginal. I believe Jen Tse was the first rooftopper to use this concept in a series dating back to the end of 2010. In fact, Tom Ryaboi’s “I’ll Make You Famous” photo that essentially changed the landscape of rooftopping photography is actually of Jen’s feet while she was taking a photo for this very project. Another photographer in Detroit, Dennis Maitland, did a similar series of feet dangling photos that garnered international media attention from the tabloids later in 2011. Since then it seems like everyone and their grandma has been doing them. Luckily I had the sense to stop after my one and only feet dangle photo, aptly named “One Time Only”.

Feet dangling and “I’m in danger!” photos are nothing but a cry for attention. If you’re modelling for a photographer while balancing on the edge of a building, you’re doing it purely for egotistical reasons. If you’re the photographer taking that photo, you’re doing less work than the person out their risking their life and you’re getting all the credit. The bottom line is you’re being admired for your antics, not for your photography.

Malaysian photographer Keow Wee Loong recently scaled a building in Kuala Lumpur to flash signs to “Save Gaza“. No matter how I looked at it, I saw absolutely no reason for him to be doing this on a rooftop. Is the act of false altruism the current state of activism? Is this the current state of rooftopping? I thought it was incredibly insulting to everyone who is caught up in the conflict and to those who are truly trying to make a difference. It really made me want to re-examine my affiliation with this activity and was one of the driving forces for me to verbalize my growing discontent. 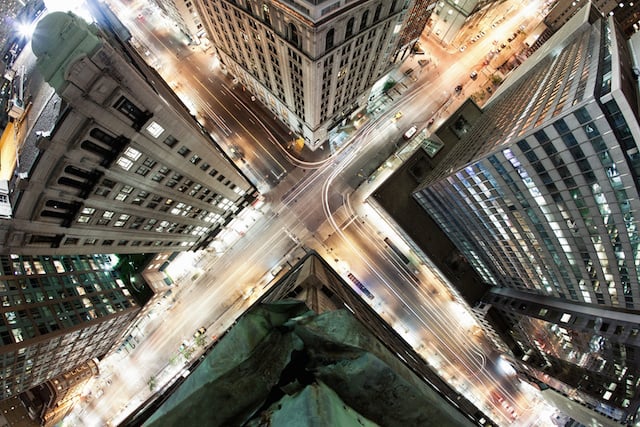 It’s a shame that the media so strongly influences the way rooftoppers and explorers are portrayed. I was sick of seeing the same old “Daredevil Photographer Risks Life to take Vertigo-Inducing Photos” headline. It was obvious that the media outlets simply wanted headlines that sell. To create controversy and portray rooftopping as something that it really isn’t. And as photographers, we let it happen. They want images of a certain aesthetic and we take those photos. We give them the photos to use in articles without ever being responsible for what will be written about us.

I made the same mistakes when it came to the media. I believed them when they said that they wanted to portray it for what it is; to not sensationalize it. But the final result was always the same daredevil bulls**t they had always been spewing. I learned from a few situations and refused to continue to be part of the tabloid machine that perpetuated the stereotypes about us. We all have that choice.

More recently, rooftopping has become a photography trend that people all over the world are getting a piece of. Von Wong, an exceptional creative commercial photographer with a huge social media following apparently felt left out of this fad and needed to jump on it, encouraging his followers to try risk their lives in the same stupid pursuit. Daniel Cheong of Dubai, known for his incredible cityscape photos, had to spin his work, all of a sudden positioning himself as some sort of rooftopping pioneer. The fact is that both of these photographers’ work stand on their own without ever having to align with rooftopping. By doing so, they only make themselves look like desperate to jump on the newest hip photography trends. 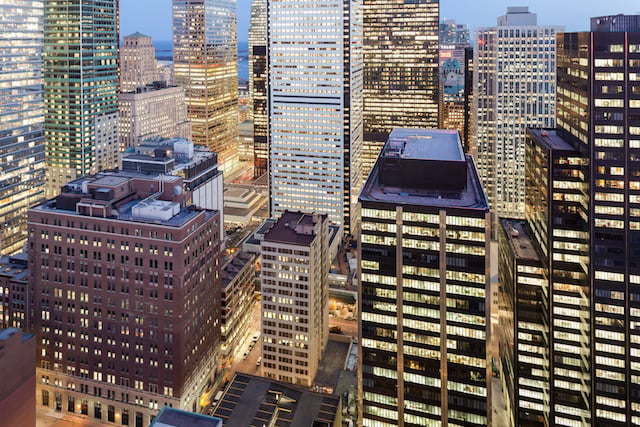 5. The Photos Don’t Mean Anything to Me

Perhaps one of the biggest internal struggles I’ve had with these images is that they’re devoid of real emotion. The images only illicit reactions like “OMG that’s crazy” or “vertigo!”. But few people respect the actual beauty of the images and can really only appreciate it a very superficial level. I personally dislike the majority of my rooftop work because I feel they lack substance. I wanted to take better photos. I wanted to take photos that were original and memorable. I realized that this wouldn’t happen continuing on the same path.

I do appreciate the the opportunity rooftopping has given me over the last five years. I’ve made a lot of great friends and got to be part of something that was really ground-breaking at the time. Though I will periodically post rooftop images, I refuse to allow it to be something that limits my creativity going forward. For now, I am just f***ing done with it.

About the author: Neil Ta is a full-time professional photographer based in Toronto, who will no longer be doing any rooftopping. His goal as a photographer is to connect with people with humour, joy, and a light attitude, while capturing images that are poignant and timeless. You can find more of his work on his website, Twitter, Facebook and Instagram. This article originally appeared here.

The Lens Flipper: A Super Simple Mount Accessory that Lets You Swap Lenses in a Flash