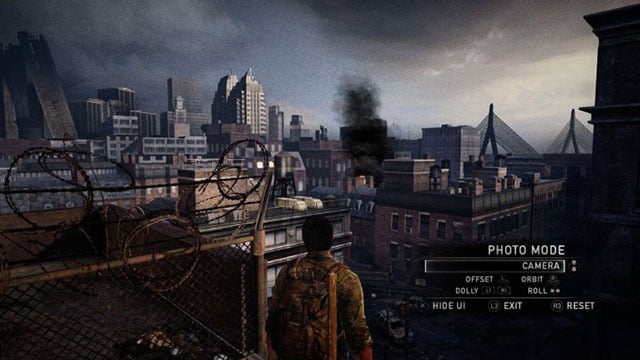 Conflict photographer Ashley Gilbertson was recently sent into a very different war zone by TIME. Instead of capturing images of human versus human conflict in real life, Gilbertson was told to document the main characters in the video game The Last of Us Remastered.

The post-apocalyptic zombie survival game was released earlier this year on the Playstation 4, and includes a special “Photo Mode” that lets players capture and share memorable moments while playing.

In a piece recounting his experience published over at TIME, Gilbertson says that his goal was to create the best possible photograph in each game level prior to moving to the next. His challenge was keeping his character alive long enough to see each new level.

Another hurdle Gilbertson had to deal with was the strangeness of “fighting” through the battlefields with a gun in his “hand” rather than a camera. Eventually, he had someone else at TIME do the in-game fighting for him while he just focused on creating shots as a photographer.

You can find a collection of the resulting photographs over on the TIME article by Gilbertson. It’s a pretty serious piece in which Gilbertson reflects on how ubiquitous violence in video games is perhaps turning US into zombies.