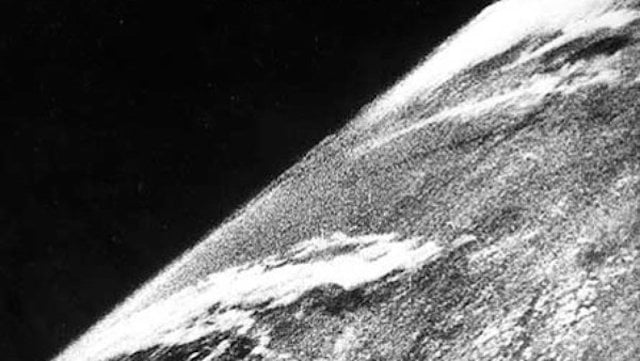 Nowadays, anybody with an Internet connection has seen tens if not hundreds of photographs taken from space. Astronauts tweet them, Hubble sends them down… rovers even putter around planets other than our own taking pictures.

But it all started with the photograph above from 1946, the first ever photo taken from space.

The story behind this photo, as told in Air & Space Magazine back in 2006, takes place on October 24th, 1946. A V-2 missile launched from the White Sands Missile Range in New Mexico used an on-board 35-millimeter motion picture camera to snap this photograph from 65 miles above our heads, capturing the Earth in all its grainy, black-and-white glory and making history at the same time.

That rocket ended up plummeting back to Earth and slamming into the ground it had just photographed at 500 feet per second, but the film survived the crash, offering scientists a view of Earth from five times higher than any photo ever taken before it.

“[The scientists] were ecstatic,” remembers Fred Rulli, then 19-years-old and charged with recovering the steel film cassette. “They were jumping up and down like kids.”

But it all started with one grainy, black-and-white photo that had a bunch of white coat-wearing scientists jumping for joy. They had made history, and even though they couldn’t have imagined just how far we would have come in the 68 years that followed, they were pretty sure this photo had just changed everything.

Candid Photos of Strangers May Soon be Illegal in The Philippines, Even if They’re Just in the Background