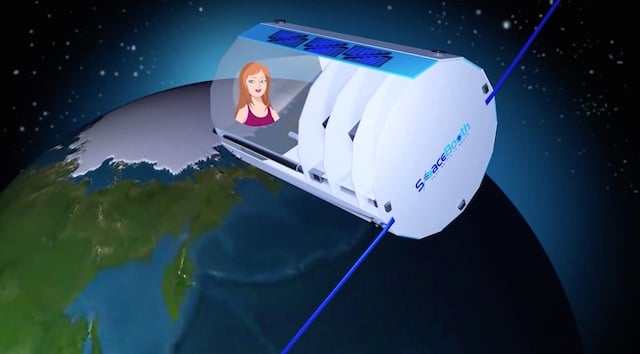 A Belgian company called SpaceBooth is planning to launch its own little — and we mean really little — satellite photo both before 2015. Its mission? To give you the chance to have your photo taken with the Earth, Moon or stars as the backdrop… for free.

The concept is fairly straightforward. Using the dedicated SpaceBooth app, you upload a small jpeg or png of yourself that is 2MB or smaller, which the app will then compress further before sending up to the satellite.

Once the photo arrives, your photograph will be projected onto a semi-translucent window, with the universe quite literally making up your backdrop, while another camera snaps a photograph of the projection and sends it back down to you at a rather measly, but still impressive, VGA resolution.

By the end of the year, the small satellite is set to be circling the Earth approximately 200 miles in the sky. As to why we felt the need to mention the size of the satellite, it’s said to be only slightly larger than a smartphone… which does pose some challenges.

For one, since it’s such a simple setup, the satellite doesn’t have any means of control. Thus, the backdrop of your image will be completely random, determined solely by its orbit around Earth. There’s also a chance things could go wrong in the process, deeming this project DOA.

That being said, if all goes as planned, it seems like a rather interesting project that would allow for some unique portraits. And I mean, really, who wouldn’t want to post a self-portrait from space on Instagram?

In the UK, ‘Antisocial’ Photography Can Get You Questioned and Potentially Arrested