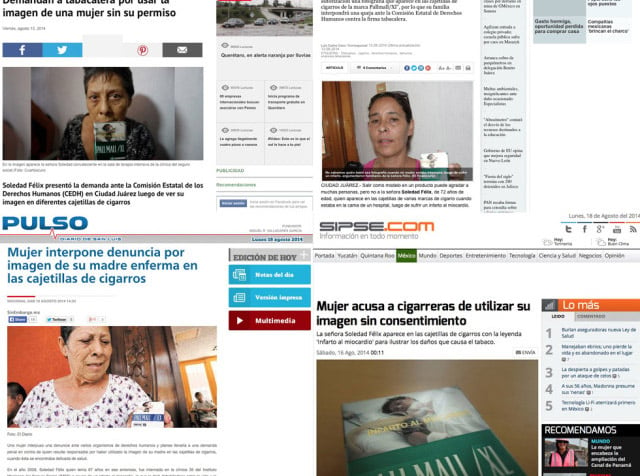 According to reports from Mexican news outlets, a woman named Soledad Félix has filed an official complaints with the Juárez City Human Rights Commission after finding a photo of herself being used as a warning label for packs of cigarettes. The picture was taken while she was hospitalized after suffering a heart attack, and was used — without her knowledge or permission — by a number of tobacco companies as part of their mandated warning against the use of tobacco.

To preface the situation, in many parts of the world, it is a required for tobacco companies to include rather gruesome photographs on their packaging in order to graphically persuade tobacco users to stop their unhealthy habit.

Although the photo of Félix has been used by tobacco companies such as Fortuna and Marlboro, it’s the Ministry of Health that’s taking the heat — they’re the ones that actually obtain and distribute the required images.

As for how they acquired the image of the then-frail Mrs. Soledad Félix taken approximately four and a half years ago, details are scarce. According to the family, this was the only time she was in the intensive care unit at the local hospital, where the photograph was taken.

In a (roughly translated) statement from the daughter of the woman pictured, she told Proceso, “We do not know who took that picture when my mother was hospitalized after suffering a heart attack, because we never authorize anyone to take pictures.”

The complaints could reportedly turn into lawsuits that cite everything from invasion of privacy to moral damages.