There are times when all you need to capture the perfect photograph is just a few more feet in height. A common technique is to carry around and use a ladder to stand on and snap the needed photograph. But a ladder is far from convenient in terms of weight in size.

Thankfully, there’s an alternative that’s far smaller and not overly cost-prohibitive. It’s often called a construction tripod, laser tripod or contractors tripod and it’s a much smaller, more convenient way to get your camera high up in the sky. 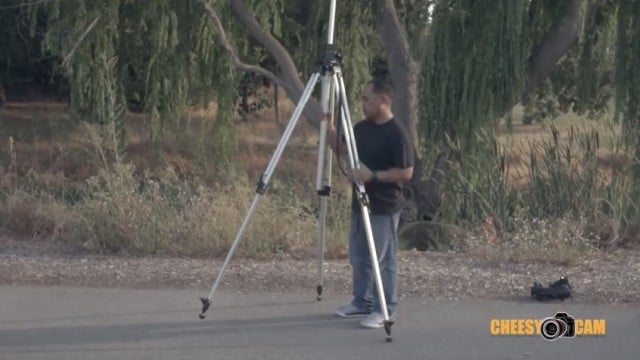 Shown off by MrCheesyCam in the above video, these tripods aren’t marketed towards photographers by any means. Costing as little as $100, these tripods are an effective method to getting your camera up to 12 feet in the air.

There are some caveats though, considering it’s not made with photographers in mind. On most of these tripods, the screw on top is 5/8th of an inch, compared to the 1/4th a standard tripod mount uses. Thus, in order to effectively use this, an adapter will be needed.

Of course, with your camera up in the air, you won’t be able to see what it sees or control it without some remote setup. But more and more cameras are getting built-in wireless controls and live-view modes, so the options are far from nonexistent.

The five minute video is directed more towards the video crowd, but it can equally apply to still photography with the right tools. Give it a watch and give MrCheesyCam a follow on YouTube for future photo fun.

Photojournalist Attacked While Covering Riots and Looting in Missouri