Erik Almas is here today to share his personal perspective on what a composition is and where he believes it falls in the world of photography. Beyond sharing his thoughts on digital compositions though, he also takes a BTS look at the making of one of his more recent compositions, using images captured while in the deserts of Namibia. Starting off the video with a humble, but heartfelt approach to explaining what he believes a digital composition is, he points out that, to him, that which is done on the computer after the image has been captured is equally part of the photographic process, if consciously thought about when snapping the images. Almas doesn’t say those who don’t look at it that way are wrong, but instead elaborates the point that this is only what he personally believes to be true.

After introducing his thoughts on the matter, he delves into a little how-to/BTS section, detailing the process behind the creation of a recent composition he believes summarizes his above thoughts perfectly. 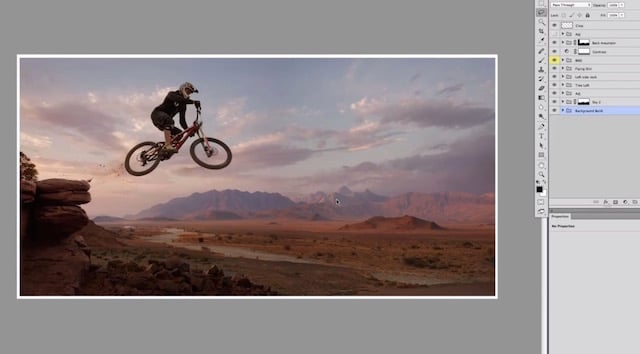 He details the process of compressing the mountains of the Namibia desert with a telephoto lens, then stitching them together in post to create the backdrop for his composition. From there, he shows off the process of adding the foreground layers, one at a time, from back to front, to create depth in the image and give it a natural feel.

The end result is a subtle composition that brings to life the vision Almas first had when looking through the viewfinder of his camera in the Namibia desert. At 11 minutes long, it’s a mid-length watch, but it’s well worth it for his thoughtful explanations and efficient workflow.