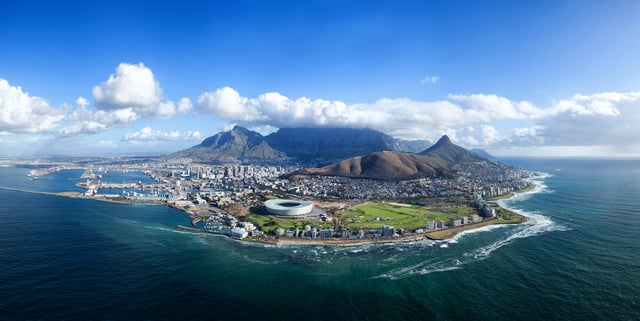 The general consensus is that photography as a business is competing in a ‘race to the bottom.’ Photographs are regularly devalued by people who steal them, agencies that sell them for a pittance, and photographers who are willing to work for free.

Given this rapidly worsening status-quo, wedding and commercial photographer Greg Lumley’s latest venture is either incredibly ballsy, or incredibly naïve: he’s trying to sell a single print of his viral aerial photograph of Cape Town for $35,000… no we didn’t add a zero by mistake.

Now we’ve seen more outrageous pricing, but in a world where viral photographs are often stolen at such a voracious rate that they become essentially valueless, the idea of selling one for tens of thousands of dollars seems completely out there.

What sets the photo apart is that the copy that went viral — garnering over 1000 shares and likes within 2 hours of Lumley putting it online — is low res. In other words, he has scarcity on his side:

To date no one has a high res version of this image except obviously myself. It is a stitched 40 Megapixel image taken from a helicopter on one of the most beautiful day’s I’ve ever seen in the Mother City! …

I wish I could claim true fame for this image but honestly I was in the right place at the right time, everything just worked and this is why duplicating the image is virtually impossible.

The image is for sale as a digital high res buyout with the exception that I keep a small print for myself autographed by the new owner.

So, those are his terms. Be the only person in the world with a print of this photograph, a true one-of-a-kind because, upon sale of the image, Lumley says he will “relinquish all rights to the image to the new owner.”

Which brings us to the title question: would you pay $35,000 for the only print (and all the rights) to this — or any other, for that matter — viral photograph? Or is a photograph in this day and age just not worth that much money. Weigh in in the comments down below.

Image credits: Photograph by Greg Lumley and used with permission

Photographer Puts His Beautiful Underwater Photography to Use Saving the Oceans