The video above isn’t a time-lapse per-se, but it is being reported as such because it allegedly condense a full hour of Israeli Army air strikes on a Gaza Neighborhood down to just one minute of footage. In that minute, you see an entire neighborhood vanish into explosions and massive clouds of dust that clear to reveal only piles of rubble.

The video was tweeted by BuzzFeed correspondent Sheera Frenkel, and it’s important to note that the info in her tweet has not been confirmed by anyone other than Al Arabia News, so details are vague and uncertain, but it’s a horrifying ‘time-lapse’ that reminds us of the GoPro video from the front of Syrian tank we shared several months ago.

This is a screenshot of the before and after at the end: 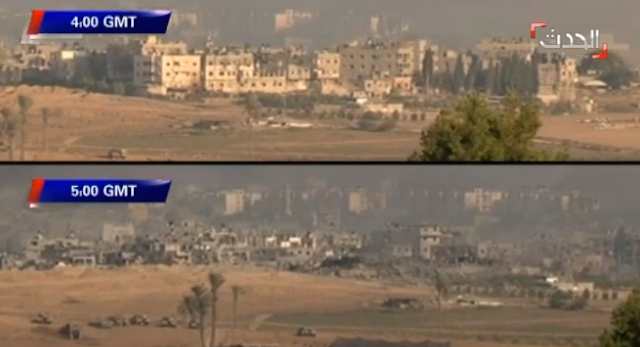 Photographs of the kind of destruction the conflict has been wreaking in Gaza can be seen in the Washington Post here.

DIY: Build Your Own Anti-Vibration Camera Drone Mount for Only $10!