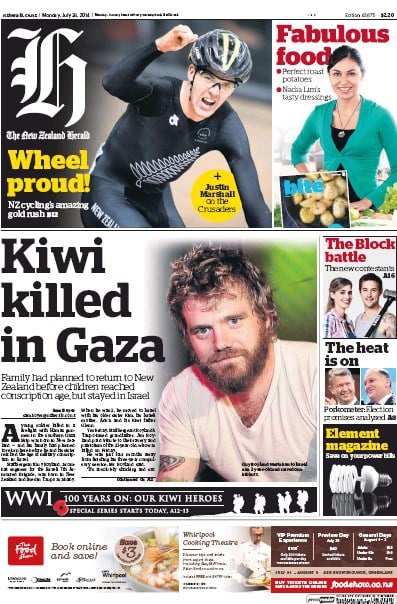 In the age of social media, major publications frequently source photos from Facebook or Twitter profiles. But as the NZ Herald recently discovered, this can lead to major, embarrassing mistakes.

Yesterday, the publication set out to tell the tragic story of New Zealand-born Israeli soldier Guy Boyland, who was killed in Gaza. But on the very front page, where the paper presumably meant to publish an image of Boyland, they instead used a Getty Image of deceased Jackass star Ryan Dunn.

The mixup, it seems, happened when the paper decided to grab an image from Boyland’s Facebook instead of reaching out to the family or other official sources. Boyland bears a slight resemblance to Dunn and had, it seems, used the photo of the deceased actor as a profile pic at some point. It was this photo the that the Herald unwittingly published on its front page:

The mistake was, of course, noticed eventually and corrected on the online version (complete with an apology to readers and the Boyland family) but the print publication is still out there and some, like writer and founder of the website Whale Oil Beef Hooked Cameron Slater, feel the mistake is unconscionable.

“That is appalling, how can you do that?” wrote a disbelieving Slater. “Disrespecting the real person who died, disrespecting Ryan Dunn, and their credibility all at the same time.”

Using a deceased person’s Facebook or Twitter picture without permission to illustrate an article is already an ethically questionable, albeit common, practice. When you combine that with a looming deadline and cut corners, however, you can easily cross the line from ‘ethically questionable’ to, as Slater put it, ‘appalling.’

Thanks for sending in the tip, Lance!

Video: Inspirational Words on Having Confidence as a Photographer