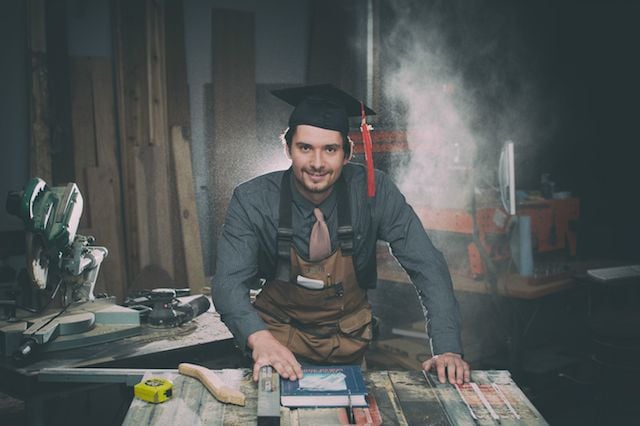 For going on four years now, casual photographer and shop teacher Aaron Cyr‘s mom has been bugging him for a graduation photo. By this year, he was already two degrees in and about to get his third, but he just couldn’t make himself pony up for the standard, banal grad photos he saw his peers getting.

Still, you can only tell your supportive mom ‘no’ so many times, and so this year he delivered… on his own terms.

Having just received a degree in Industrial Arts Education, Cyr put the knowledge he’s acquired over the years from blogs and YouTube tutorials to use by shooting his own, unique, awesome graduation photograph.

When we spoke to Cyr about the photo, we asked him to tell us what gear he used and how he set it up. Here’s his description:

[I used a] Nikon D90 with 35mm f1.8 sitting on a tripod [and] two bare Vivitar 285HV flashes on 1/8 power. One flash was in the camera hotshoe bouncing off the ceiling, the other was low behind me triggered with an optical slave sensor.

The photo was shot at 1/200, f/3.2 and ISO 200. The dust in the background was thrown in the air quickly before turning around, and I had a friend release the trigger.

Starting in starting in Fall 2014, Cyr will be teaching woodworking and graphic arts to inner-city students at a school in Winnipeg, MB, where he tells us he hopes to bring a photography program back to the school. You can find more from him here.

Oh, and in case you’re wondering, his mom loved the photo… she’ll be getting an 8×10 print for her birthday.

Image credits: Photograph by Aaron Cyr and used with permission