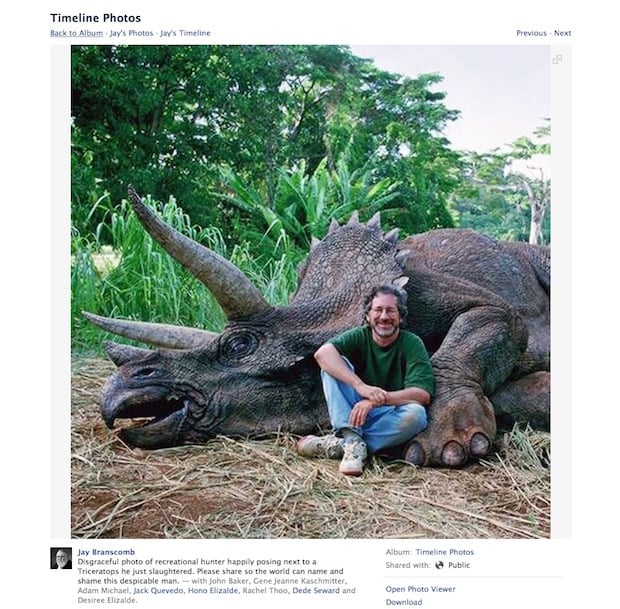 There are times when you lose all hope in humankind. We may be the most intelligent of all creatures, but just because our brains are the most developed of any mammal doesn’t mean we all use them. Case in point is the viral hilarity surrounding the image above.

If you’re a movie nerd, you’ve probably already put two and two together to draw the conclusion that the above photograph is a BTS photo of noted director Steven Spielberg on the set of Jurassic Park with a Triceratops prop. Nothing out of the ordinary for a director to pose with a prop, right?

Normally, not, but with the help of a sarcastic post from Internet humorist Jay Branscomb and the crowdsourced knee-jerk reactive nature of the Internet, it was a tragedy.

Branscomb posted the above photograph on his Facebook page with the facetious caption, “Disgraceful photo of recreational hunter happily posing next to a Triceratops he just slaughtered. Please share so the world can name and shame this despicable man.”

Presumably intending only to get a few laughs out of people, Branscomb received much more than he bargained for. Rather than laughing and picking up on the sarcasm in the post, certain individuals started ripping into this nameless man who was ruthless enough to hunt down such a beautiful creature.

We really wish we were kidding, but we’re not. Some people did indeed seem to think this was a real triceratops. Here’s just one example comment:

I think zoos are the best way to keep these innocent animals safe… a**holes like this piece of s*** are going into these beautiful animals HOME [sic] and killing them… it’s no different than someone coming into your home and murdering you… that’s what’s so selfish about ppl that hunt they’re uneducated and their way of thinking is wellll these animals are overpopulating and are going to die anyway… WELL HUMAN BEINGS are overpopulating and GUEE WHAT if we were to kill an innocent human being and used that as an excuse we’d be in prison… I think it’s time to say the same about animal rights.

Branscomb wasn’t finished, though. Shortly after posting the triceratops photograph, he added the image below in an attempt to capitalize on the attention and carry on his trolling. 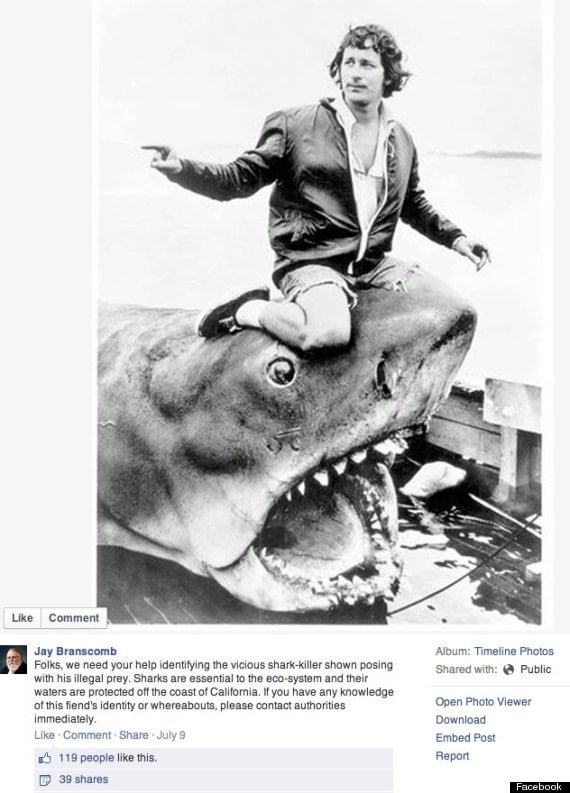 Honestly, there aren’t really words for moments like these. As useful and wonderful as the Internet can be, it’s not always pretty, people. #savethetriceratops.