Over the past few years, iPhoneography has created a new form of photography that has and will continue to re-structure how we interface with technology, gather and generate data, and how we create narratives. iPhone (and similar smartphone) users employ mobile photography to disseminate mass amounts of information, to subvert cultural institutions, and for political rallying. These behaviors parallel the same strategies of the radical Avant-Garde art movements of the 20th century.

In the third and final article in this series I will expose the hidden contradiction that exist between mobile photography and the Avant-Garde described in Wallace’s quote through the use of Collage. I’ll assert that mobile photography is inherently Avant-Garde and has resulted in data overload. Data overload causes dysfunction of two brain regions (the prefrontal cortex and amygdala), and fragments our attention towards environmental information. It is this fragmented attention that parallels the fractured sense of space-time represented by Collage. I’ll conclude by arguing that mobile devices are the source of the very problems they promote. It is this paradoxical relationship with technology that drives the anxiety of the photographer.

Please Note: If you haven’t yet read the first two articles in this series, I recommend doing so now. Or, here’s a link that summarizes Part I and Part II.

The iPhone is the epitome of global media and communication; it has subverted the cultural institution of photojournalism, and has occurred during a time of great social upheaval, which is why mobile photography fits the Avant-Garde criteria.

The great recession from 2007-09 created an opportunity for mobile photography to destabilize an already weakening photography market. The iPhone and App Store were in the right place at the right time to provide low-cost alternatives to professional cameras and their related photographers. We’ve seen the loss of full-time newspaper staff photographers and the rise of instantaneous mobile photojournalism. Benjamin Lowy’s iconic Time Magazine cover of Hurricane Sandy is a testament to this transition.

Today there’s a rise of Collage through the use of apps such as Blender, Superimpose, and Leonardo, and many of the winning images of international Mobile photography contests are Collage. Artists such as Nettie Edwards, Cedric Blanchon, and Sara Tune utilize Collage, app stacking, and abstract composites. Their work disjoints past and present, alludes to the fragility of memory, and invokes reflective analysis. Moreover, Collage has been re-contextualized with many new exhibits featuring mobile photography not in print but on screen, which in turn breaks the continuity of image viewing. This form of digital curation mimics that of Instagram (as well as Tumblr, Facebook, and Twitter) and here we see that these platforms are where the Avant-Garde is transmitted.

Mobile technology has superseded photography and mobile-phone-generated Collage is a measure of this disruption, which is portrayed through fractured visual imagery. The continuity of our perception requires exceptional cognitive ability, such as visual attention, in order to create a seamless sense of self. Increasing computing power has resulted in a corresponding data overload, which hinders our attention. An overload of information can break our cohesive sense of space and time. Thus, our sense of self is disrupted through the use of mobile photography because of rapid technological development.

To Infinity and Beyond!

In 1976, Gordon Moore (co-founder of Intel), discovered that the number of transistors on a microchip double approximately every two years. This exponential climb of digital computation has led to the smartphone, which has compressed two hundred years of technology into a single device that weighs mere ounces. A consequence of exponential computation is that knowledge is being updated faster than we can use it, let alone understand it. The genius mathematician and proto-computer scientist John von Neumann summarized it best:

“[The] ever accelerating progress of technology and changes in the mode of human life, which gives the appearance of approaching some essential singularity in the history of the race beyond which human affairs, as we know them, could not continue”

In other words, technological progression will be so fast that it will appear as being infinite (i.e., a singularity). Technology will surpass our ability to keep up with it and we will be unable to use technology in a way that benefits the human race.

As technology permeates throughout our cultural identity we become ever more interactive with information. Technology is generally considered to have a positive impact on society, yet technology will and has replaced cultural treasures, behaviors, and human workers. Examples range from bound books, face to face conversations, to teachers. MIT economists have provided evidence that the rate of technology is now so rapid that it is displacing human workers at a faster rate than workers can learn new technology.

This suggests that we are becoming incapable of using previous knowledge to guide our decisions to help shape the future. The human brain is not equipped to handle such information overload, which makes us more dependent on technology itself.

Information Overload, Anxiety, and The Brain

In an optimal state, humans use environmental cues to help predict future outcomes. This ability to predict the potential future (a function of the prefrontal cortex) helps us go towards things we like and away from things that could harm us. We create cue-outcome associations throughout our lives, which allows us to use our past to inform our decisions in present time in order to obtain our future goals. However, if we cannot use our learnt cue-outcome associations to aid in guiding our future, then uncertainty sets in. 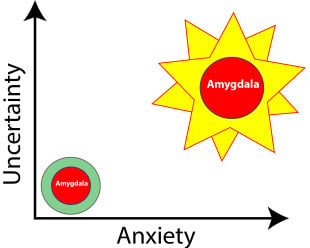 As we collect more and more data the more we must sift through it. The prefrontal cortex has a limited number of tasks it can attend to and when the demand to conduct multiple tasks overloads the prefrontal cortex there is a precipitous drop in ability to perform each task. In this sense, attention splits apart resulting in discontinuity between environmental cues and outcomes. Meaning, the ability to make cue-outcome associations becomes more chaotic resulting in our inability to predict the potential future. Heavy multitasking prevents us from excluding irrelevant information, it increases the feelings of stress, thinking becomes fractured and after the multitasking ends, we still cannot focus.

Watching Others Watch Ourselves

Thus far, I’ve argued that technology provides us with more information than we can attend to, causing dysfunction of the prefrontal cortex and amygdala, which in turn fragments our attention and generates anxiety. This fractured sense of how we perceive and interact with the environment and technology parallels the fractured nature of Collage. Correspondingly, Collage is a cultural measure of anxiety produced by technology. In the same vein, many of us seem to be using technology as a coping mechanism to alleviate the anxiety caused by technology. This attempt to transcend our feelings of anxiety with the source of that anxiety is paradoxical.

The late David Foster Wallace poignantly describes the same contradiction in a similar context of media saturation when he writes:

“It is ironic that an extremely canny and unattractive self-consciousness is necessary to create TV performers’ illusion of unconscious appeal. That products presented as helping you express individuality can afford to be advertised on television only because they sell to enormous numbers of people. And so on.”

Replace “TV performers’ illusion” with “selfies” and we are reminded of the iPhone and Apple’s “Think Different” campaign. We are aware of the hypocrisy (contradiction, paradox, irony) behind Apple’s assertion that the iPhone is a special item that gives individuals their heterogeneous uniqueness when in reality it only serves to offer homogeneity.

Still, the selfie offers the ability to protect the image of our identity by taking, choosing and altering images of ourselves until an optimized sense of self is attained. This manipulated and curated representation of identity also allows us to feel in control in an uncertain world. Thus, we use the selfie to help reduce anxiety on the culprit device that generates it.

The radical Avant-Garde utilized technology and irony to break continuity and reveal hypocrisy. Now, both technology and irony are the underlying forces of pop-culture. This is what David Foster’s quotation at the top alludes to. Technology is seen as both solution and problem. By definition, the problem is not the solution.

Perhaps we accept this paradox as a way to defend ourselves against the very real and frightening changes of our time. For example, we’re right on track for Earth’s 6th mass extinction. Here I am on my mac, uploading images created on my iPhone, in an air conditioned room with a external monitor and hard drive running as I listen to music through my Bose noise-canceling headphones.

I’m well aware that the production of technological devices has looming consequences on the world’s natural resources. High-tech facilities leach natural resources, and new technologies replace prior generations at faster rates than raw materials can keep up with. The anxiety of this photographer is the uncertainty of our planet’s ability to maintain healthy human life given our desire for technological progress. As Nature falls apart I’m sure I’ll take a picture and when we get there Nature will already provide the collage.

About the author: Joshua Sariñana is a neuroscientist at MIT, where he studies the genetic basis of learning and memory. Josh is interested in examining photography as it relates to neuroscience and culture. You can follow him on Instagram and check out some of his other  photography and neuroscience work on his website.

Image credits: Nettie Edwards – Rules of Engagement 02 and 03, and Nothing to Declare. Joshua Sariñana – Help

Many thanks to Susan Akiko Lambe Sariñana and Jorge Basillio for their input.