According to a newly-published patent from Apple, the tech giant is looking to flex its muscles in the world of smartphone camera technology… quite literally.

United States Patent Application No. 20140168799, titled Artificial Muscle Camera Lens Actuator, describes a muscle-like focusing and aperture system built from electroactive polymers, or EAPs — a type of ‘smart material’ that changes its shape when it’s subjected to an electric field.

Meant to replace the voice coil motor that is the current standard in the world of smartphone cameras, the new system would be smaller, lighter, cheaper and ‘exhibit extremely low power consumption.’ All big fat check marks in the pros column if Apple can make this design work. 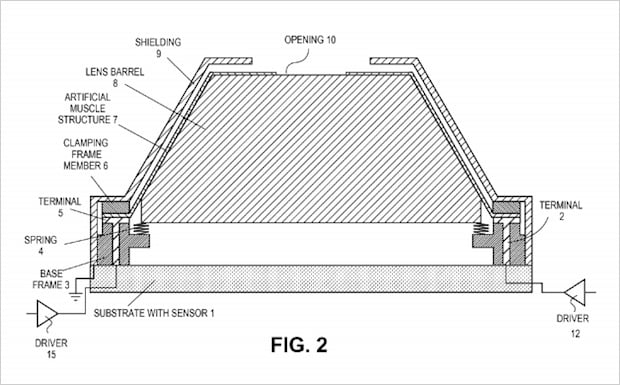 The technical details are, well, technical. The implementation has Apple using this polymer to create a cone-like structure with negative electrodes at the top and positive at the bottom that would enable the system to move a lens up and down.

Additionally, the artificial muscle cone would have an opening at the top, which would act as the aperture and open and close using the same sorts of electrical signals. You can read up further on the structure and implementation of the materials and electrodes at the US patent office website, but the practical application here is both space and power saving. Future iPhones and iPads could carry larger camera components thanks to the space saved, increasing quality while enabling Apple to continue slimming down future iterations at the same time.

Of course, it is a patent, and so any talk of this tech showing up in future iOS devices is pure speculation at this point; however, with tech getting smaller and more powerful at the same time, it’s advances like this that will keep these seemingly-opposing goals from interfering with each other… if only for a little while longer.

(via Apple Insider via The Daily Mail)