On this, the 70th anniversary of the D-Day invasion of Normandy, it seemed appropriate that we cap off the day and the week with the story and images of a remarkable photographer who was there: US Army Private Tony Vaccaro.

Mr. Vaccaro, then 22 and now 92, has an incredible story to tell. Unlike most of the people who photographed the war, he was not a military photographer. He was a soldier with a camera, forced to “borrow” film from where he could and develop it in chemical baths he poured into army helmets. 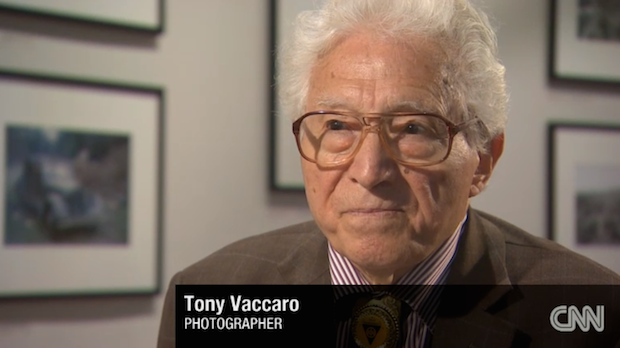 His images, as a result, were more candid than what most of his peers came back with. As he explains in the video profile above, put together by CNN, the intimacy between him and his unit was “at such a level, that if I aimed at camera they didn’t react to it.”

At 92 years old, the once combat and later portrait and fashion photographer is still incredibly spritely, moving about like a man half his age. Which is why, when he says he will be back in Normandy at the 80th anniversary at age 102, we don’t doubt him for a second.

Watch the video above to hear from this great man, and then check out the full CNN write-up by clicking on the link below.

D-Day through a lens: ‘First the rifle, then photographs’ [CNN]

Astronaut Beams Down the First Vine from Space, Making the Most of his First Trip Up