Some experiences just aren’t going to happen twice, and (legally) flying over Manhattan with four of your friends in a wingsuit is one of them.

Thankfully, it was a Red Bull team that did this, and just like they did with Felix Baumgartner and his epic skydive from the edge of space, Red Bull made sure to pack some GoPros on the jumpers so that we could experience what it was like as well. 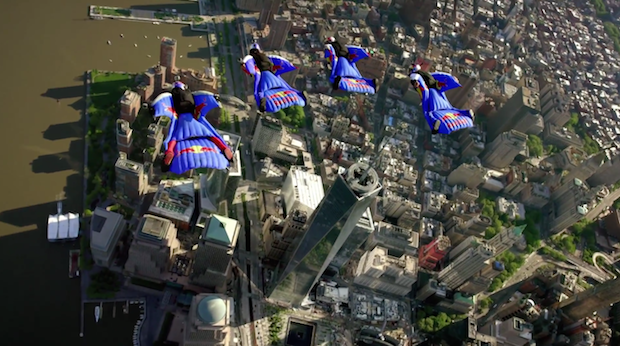 The video above gives you that first person view, as the Red Bull Air Force Wingsuit Flyers hurtle over Manhattan at 118mph before landing safely on a barge in the Hudson river.

Below, Red Bull has just released a behind the scenes video that shows the planning that went into the jump and adds some amazing footage that showing just how close they were to massive One World Trade Center.

Both videos contain footage that you’ll probably never see again. The number of hoops that Red Bull had to jump through, and the number of times, judging by the BTS video, that they were told “no” make it unlikely something like this will be allowed again in the near future.

So check out both videos and start your Sunday off with a nice shot of vicarious adrenaline.

Back to Basics: How to Use Photoshop’s Cool Content Aware Scale Tool

4 Mirrorless Cameras Battle the Nikon D4s in an AutoFocus Shootout