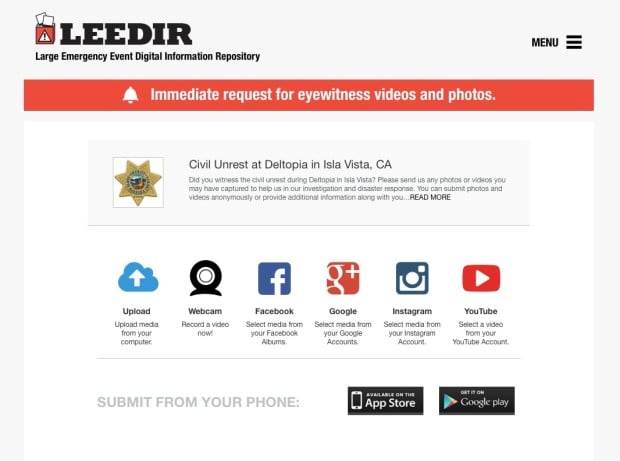 With cameras as ubiquitous as they are, citizen-provided evidence is becoming more and more substantial when it comes to acquitting or incriminating victims in court. However, no matter how much information is captured, it’s rare for it all to be seen by those in charge of making the critical decisions, as there isn’t an effective way to submit or sort through the media.

To change that, the Los Angeles Sheriff’s Department has launched a new online app, built around Amazon’s Web Services, to allow anyone to submit photo and video evidence of incidences.

Called Large Emergency Event Digital Information Repository (LEEDIR), the application is available in the browser, on Android, and iOS, meaning no matter the device used, submitting evidence is never more than a few clicks away.

As is to be expected, there are many privacy officials concerned about the use of such a crowdsourced method of evidence-gathering, but those who created LEEDIR claim the LASD and any future forces who will use similar services will be ready to deal effectively.

As of now, the app is being used for but a few specific locations and events, but overtime, as the service is tested, it will continue to expand outward for more general use.

What are your thoughts on gathering crowd-sourced evidence? Could this grow to be considered an invasion of privacy, especially towards the more intimate and personal cases, or will this help provide a more broad, less bias approach to gathering evidence?

(via ArsTechnica via Engadget)

The Story of Anthony Carbajal, the Photog Whose Career Was Derailed by ALS