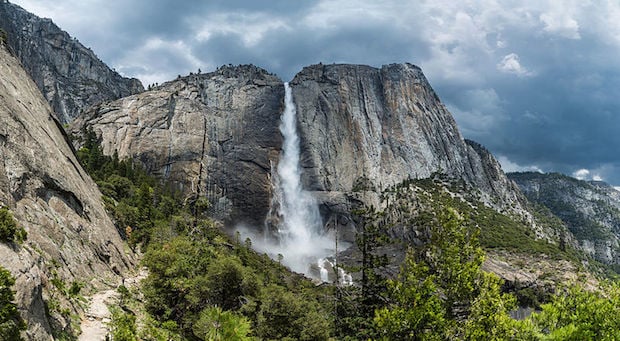 Would you like to photograph the Upper Yosemite Falls by drone? Attach a GoPro to your newly-acquired DJI Phantom 2 and just have at it, capturing views that Ansel Adams would envy? Well, you can’t, because it turns out “use of unmanned aircraft systems (drones)” is prohibited in Yosemite National Park.

The rule was shared in a National Park Service (NPS) news release published on Friday. The release, aptly titled “Use of Unmanned Aircraft Systems (Drones) Prohibited in Yosemite National Park” explains why using the unmanned aerial vehicles to capture the park from a unique vantage point is a no-go:

The park has experienced an increase in visitors using drones within park boundaries over the last few years. Drones have been witnessed filming climbers ascending climbing routes, filming views above tree-tops, and filming aerial footage of the park. Drones can be extremely noisy, and can impact the natural soundscape.

Drones can also impact the wilderness experience for other visitors creating an environment that is not conducive to wilderness travel. The use of drones also interferes with emergency rescue operations and can cause confusion and distraction for rescue personnel and other parties involved in the rescue operation. Additionally, drones can have negative impacts on wildlife nearby the area of use, especially sensitive nesting peregrine falcons on cliff walls.

According to the release, this has in fact always been a rule “due to regulations outlined in the Code of Federal Regulations (CFR).” Those regulations (specifically Thirty Six CFR 2.17(a)(3)) states that “delivering or retrieving a person or object by parachute, helicopter, or other airborne means” is illegal.

And if that’s not clear enough for you, the NPS goes on to elaborate that this includes, “drones of all shapes and sizes.”