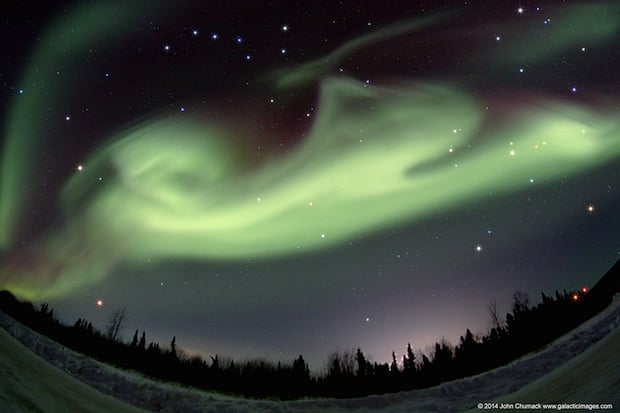 Time-lapse photographer Ole Salomonsen once referred to the aurora borealis as the ‘polar spirits,’ and characterized their movements as dancing. Well, after seeing the image above by photographer John Chumack we’re tempted to conclude that the polar spirits have pets that do some jumping while their parents dance.

A beautiful image captured while on his annual aurora tour last month near Fairbanks, AL, Chumack calls this “one of [his] best fisheye lens shots of the Aurora.” When the dog appeared in the sky, he quickly got out his Baader Modified Canon Rebel XSi with 8mm lens and set up a 15-second exposure at ISO 1600. The image above is the result.

To learn more, head over to Chumack’s Galactic Images blog by clicking here. And while you’re there, don’t forget to check out the labeled version that points out the notable planets, stars and constellations surrounding Aurora Balto in this image.

Image credits: Photograph by John Chumack and used with permission.

DigitalRev: 5 Tips for Making You Look Like Less of a Tool While Taking Selfies