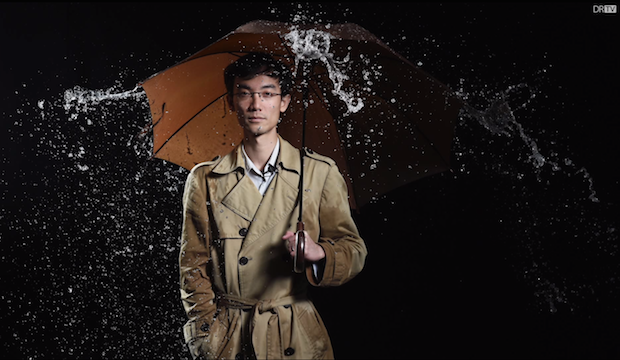 About a month ago, the folks at DigitalRev TV launched a new series called “Speed Shooter” in which they show you how to take great high-speed shots of various subjects. We didn’t get a chance to cover the first episode when it first came out, and so now that episode two has debuted we thought we’d put them together in one.

Lucky for us, the first two episodes juxtapose well. In the first, Kai will show you how to shoot fire balls, and in the second the subject is water.

The first episode is more straight forward. All you really need is a camera that can shoot very quickly, some coffee creamer, a way to light it and a way to blow the coffee creamer through the flame. DR doesn’t mention it so we will: have a fire extinguisher handy and don’t do this anywhere you might set a serious blaze! They did it at a barbecue site.

The second video is a bit more involved but also a bit more interesting. Kai explains some flash photography terminology, they build a safe studio area so that nothing electronic gets splashed and then the team begins hurling water all over the place.

The final shots, like the one you see at the top, actually turned out great.

No word on what’s coming next, but keep an eye out for more speed shooter episodes if you like your high-speed photography tutorials with a touch of cursing and sexual innuendo.