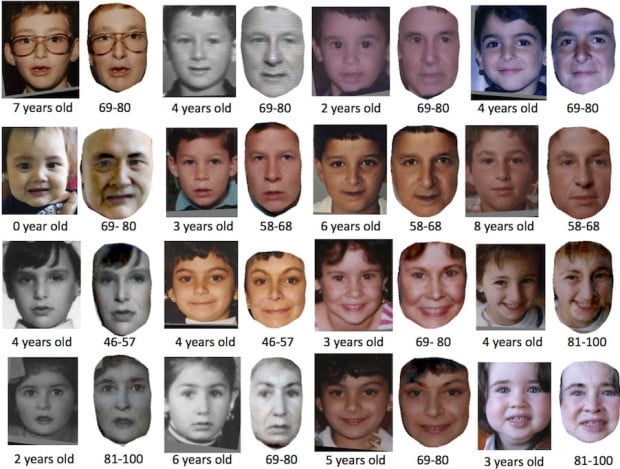 In crazy-bordering-on-creepy-but-also-super-fascinating news, researchers at the University of Washington have found a new technique to simulate the aging process of human faces over the course of almost eight decades … using nothing more than a single photo.

Called “illumination–aware age progression,” this particular method uses a single image to “automatically produce a series of age-progressed outputs between 1 and 80 years of age, accounting for pose, expression and illumination.” As seen in the GIF below, the results are interesting to say the least.

To see just how eerily accurate the results can be, the below image compares the results of the new–found method with a progression of photographs. Note that the images created with this new technique have been “composited into the ground truth photo to match the hairstyle and background,” but as far as facial construction goes, the progression is almost spot-on.

The compositing of the morphed photo onto the actual photo does show that the method isn’t completely fool-proof, nor will it guarantee spot-on results, but for using a single image, the resemblances seem beyond uncanny in some instances.

These averages depict a prototype man and woman aging from 0 to 80, under any desired illumination, and capture the differences in shape and texture between ages. Applying these differences to a new photo yields an age progressed result.

No word on when or even if this type of thing will make it into consumer technology in the form of a strange selfie app, but we have a feeling there would be buyers if it ever was. We can imagine the hashtag now: #mein60years, followed closely by #nowimdepressed and (if you’ll allow us to be optimistic) #nevertakingaselfieagain.

(via University of Washington via Gizmodo)