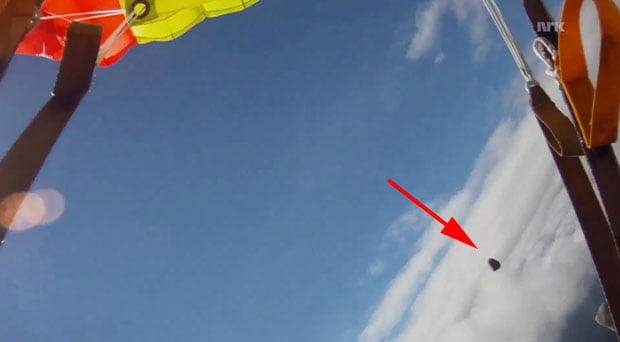 For the first time ever, a meteor has been captured on camera falling through the sky after it has finished burning. And that’s not all: the baseball-sized space rock nearly slammed into the man behind the camera.

The incident happened back in the summer of 2012, when skydiver Anders Helstrup and other members of the Oslo Parachute Club took to the skies above Hedmark, Norway. Helstrup documented the jump with two cameras fixed to the front and back of his helmet.

Helstrup tells NRK (the largest media outlet in Norway) that on the way down he felt “something” happen, but didn’t know what. It was only after landing and reviewing his camera footage that he discovered something shocking: a rock had fallen from the heavens and missed him by just a few yards. Here’s the footage:

Helstrup then reported his story to the Natural History Museum in Oslo, Norway and shared it with the community of meteorite experts. The experts are convinced that Helstrup has in fact captured a “dark flight” meteor for the first time ever.

“It has never happened before that a meteorite has been filmed during dark flight; this is the first time in world history,” geologist Hans Amundsen tells NRK. He says that the stone can’t be anything but a meteor based on its shape, and that it was most likely a piece from a larger meteor that had exploded 12 miles above Earth’s surface.

Most of the time, meteoroids burn up after entering our planet’s atmosphere, but sometimes larger ones survive the journey and enter what’s known as “dark flight.” This is when the rock stops burning up and begins to fall to the ground at terminal velocity. Amundsen estimates that the meteor was traveling at around 186 mph when it whizzed past Helstrup.

What’s the likelihood of another skydiver capturing the same thing on camera? Not very good at all: Amundsen estimates that you’d have a better chance at winning the lottery three times in a row! Now that’s a once-in-a-lifetime Kodak moment.