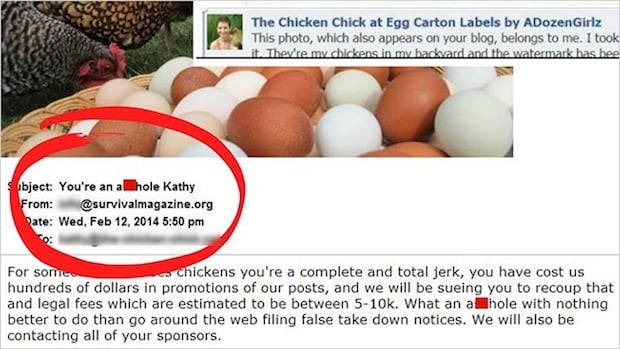 Buckle up, because this is a copyright battle that has hit rock bottom and started digging with gusto. How much gusto? Lets just say that the he-said-she-said nature of this ferocious back-and-forth between a photographer and a magazine that used her photo without permission makes the whole Color Run debacle look tame.

The story begins with unauthorized use of a photo, a polite (but ignored) copyright complaint, a takedown notice, and a reply email in which the offender called the photographer an a**hole and said they would be suing.

Kathy Shea Mormino is the owner of the popular backyard chicken site The Chicken Chick and the photographer behind a photo that she recently found on Survival Magazine’s Facebook page and blog. Oh, and she’s also an attorney.

The photo had been used without permission and had, according to Mormino, even had her watermark removed. All of this smells of willful copyright infringement but Mormino decided to give the magazine the benefit of the doubt and, instead of filing a takedown notice immediately, politely asked that the magazine take the photo down. 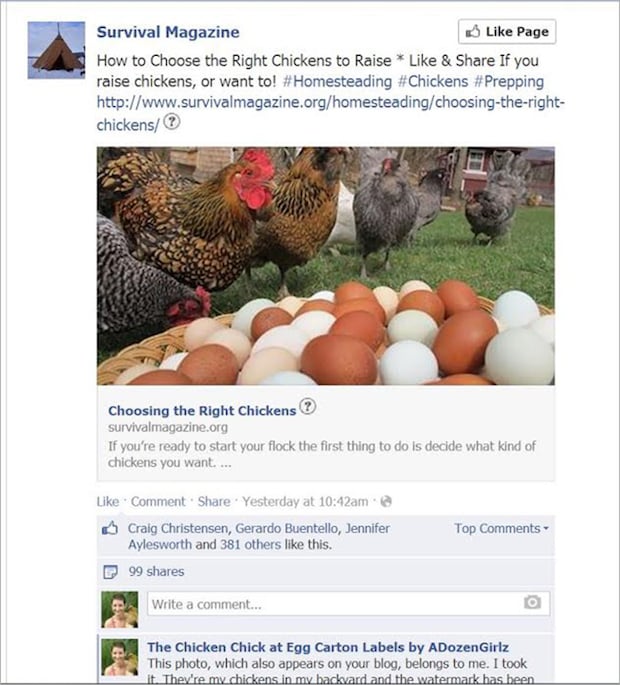 As you might imagine, her comment was deleted and ignored, and so she took it to the next level. This is where the stories diverge:

According to Mormino, who spoke directly to Adweek about the incident, she filed exactly one copyright infringement complaint with Facebook, which was carried out a few hours later.

According to the magazine, which also got in touch with Adweek, she filed ‘about 10’ takedown notices for posts that had nothing to do with her, her watermark wasn’t removed, her photo was removed immediately after they found out about the infringement (not from her, but from Facebook, they claim she never got in touch), and her reaction was all around ‘malicious.’

It’s anybody’s guess as to who is telling the truth here — although evidence (i.e. Mormino’s Facebook comment above) seems to indicate the magazine is in the wrong — but we do know one thing for sure: this is the email she received in response to the photo being forcefully taken down by Facebook:

An unidentified contributor for the magazine calls Mormino an a**hole several times, accuses her of filing several fake takedown notices and says that they will be suing her and contacting all of her sponsors.

A shocked Mormino posted a screenshot of the email to her Facebook page, where fans and photographers the world over, none of which could believe their eyes, took to Survival Magazine’s FB to voice their outrage, eventually forcing the magazine to take down the page entirely (at least for a time, it seems to be back up now).

Since then the back and forth has taken place largely though the original Adweek article, in which Survival Magazine and Mormino alternate telling very different stories that couldn’t possibly both be true.

In our opinion, the story makes much more sense told from the photographer’s perspective. You have to prove ownership of a photo before Facebook will take it down, which makes it unlikely Mormino would go on a Facebook takedown spree for the heck of it. Plus, the magazine is denying she ever got in touch, but she has the screenshot to prove it.

Whatever the case, Survival Magazine has now gotten itself mixed up in a very public, very humiliating copyright battle that could have been avoided entirely if that very strong-worded email was never sent. “I would have excused the unauthorized use of my photo,” Mormino tells Adweek. “Their bad behavior ex post facto, however, is completely inexcusable.”

To read the magazine and Mormino’s full statements, be sure to check out Adweek‘s coverage by clicking here. And don’t hesitate to share your thoughts in the comments down below.

Thanks for sending in the tip, Doug!