Lucas Foglia grew up on a small family farm in New York and graduated from Brown University and the Yale School of Art. Foglia’s photographs are exhibited and collected internationally. Nazraeli Press just published Foglia’s second book, Frontcountry. Frontcountry focuses on people living in the midst of a mining boom in the modern American West. 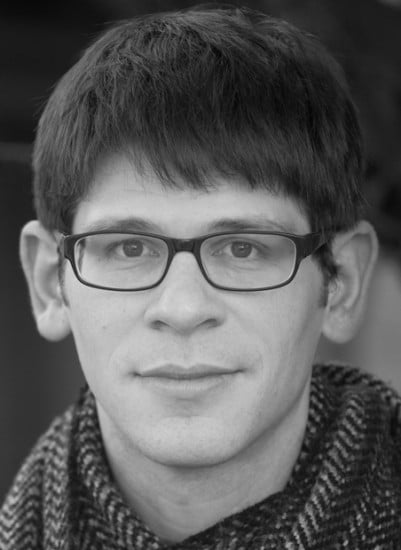 PetaPixel: First off Lucas, tell us about your initial interests in photography. What was the moment when you decided that it was what you wanted to pursue as a career?

Lucas Foglia: When I was 18 I met Arnold Newman and showed him a portfolio of photographs I had made in rural Maine. He invited me to print in the darkroom at his studio in New York City. Looking back, that’s when I realized I could be a photographer.

PP: What did you learn from Arnold Newman?

LF: Arnold taught me that in portraiture the composition is as important as the expression of the person being photographed, but that it is the intimacy of the expression that makes a portrait memorable.

PP: Who were among your early influences?

LF: My mother is a folklorist, a storyteller. My father is a farmer. Their lifestyle was my earliest influence. Photography allows me to tell stories about people, and about their connection to land. When I was a teenager, my father gave me a book by Rick Bass. Bass lives in Yaak Valley, Montana, and writes fictional stories based on the places and the people he knows well. I started to think of photography that way — as a blend of experience and imagination.

PP: What contemporary photographers do you look to for inspiration and ideas?

PP: Before we get into talking about your latest work, please give us some background on your much acclaimed series, A Natural Order. What was the goal of this work?

LF: The goal of A Natural Order was to see what a completely self-sufficient way of living might look like. From 2006 through 2010, I befriended and photographed a network of people who had left cities and suburbs to live off the grid in the rural southeastern United States.

They chose to build their homes from local materials, obtain their water from nearby springs, and hunt, gather, or grow their own food. No one I found lived in complete isolation from the mainstream. Many have websites and cell phones. They don’t wholly reject the modern world. Instead, they step away from it and choose the parts that they want to bring with them.

PP: Having grown up with a similar ethos as those you photograph, do you yourself still live with these principles of self-sufficiency?

LF: I travel too much to be self-sufficient. I barter and garden, and I like living cooperatively with a community of friends.

PP: What spurred you into making your most recent book, Frontcountry?

LF: When a close friend moved to Wyoming, I went to visit. The community felt small and the land felt bigger, harsher and more remote than anything I had experienced. What drew me to photograph in the American West was the idea that two very different lifestyles, ranching and mining, share and depend on the same landscape. Between 2006 and 2013, I traveled throughout rural Idaho, Montana, Nevada, New Mexico, Texas, and Wyoming, some of the least populated regions in the United States. Frontcountry is a photographic account of people living in the midst of a mining boom that is transforming the modern American West.

PP: The rural and rustic lifestyles of the people you portray in both Frontcountry and A Natural Order are such a departure from the hyper modernized lifestyles offered by many contemporary image-makers. In light of your interest in photographing these small and outlying communities, what role do you feel you’ve ascribed to yourself; as a photographer and documentarian? Are you an outsider looking in, or an insider reaching out?

LF: Most of the people I photograph are friends, or they become friends. Because I was introduced to them by people they trusted, they trusted me.

PP: Your photographs are highly lyrical, colorful, and formalized. Can you speak about how you use composition to shape the tone of your images? Why photograph structurally, rather than with a more stream-of-conscious style?

LF: Anais Nin wrote, “We don’t see things as they are, we see them as we are.” I try to make photographs that are complex in both their composition and their content. I want my photographs to provoke people to look, to ask questions, and to find their own answers.

PP: What can you tell us about your process of making pictures? Do you work as a type of director who guides and suggests the actions of your subjects, or do you photograph in a more detached manner, as a proverbial fly on the wall?

LF: I do collaborate with and sometimes direct the people I photograph, but I always work from events that are happening around me. And I always leave room for surprises. For instance, I traveled to photograph two Peruvian sheepherders, Oscar and Wilson, as they trailed sheep across the high desert in Wyoming. The photograph I included in the book is of their dogs mating when they were supposed to be guarding sheep.

PP: After years of photographing, this project was just released as a book. Talk about the editing decisions you made. What is included in the book besides the photographs?

LF: I made more than 60,000 images over the six years of the project. Working with Nazraeli Press, we chose 60 images for the book. The book starts with photographs of cowboys and gradually shows the encroachment of mining companies, from copper to oil, coal, gold and natural gas. The introductory essay in the book was written by Olan Clifford Teel, a Nevada rancher who lives next to a gold mine. At the end of the book is a list of news sources. There is also a set of maps to identify the location of each photograph.

PP: We as photographers always want our viewers to walk away with new ideas and perspectives on the world, but what did you yourself take away from the experience of this project?

LF: The photograph of “George chasing Wildfires, Eureka, Nevada 2012” is on the cover of the book. George raised cattle for most of his life. In his retirement he enjoys chasing wildfires. We drove on dirt roads with dust coming up through the floor of his truck, and then stopped at the hill with the fire burning on the other side. For safety, George had two bottles of water, a Coke, a candy bar, a shovel, and a handgun. In the photograph, the fire cloud arcs over both of us. It reminds me of how immense and uncontrollable that terrain is, and of how small I feel in it.

PP: What’s the next project on your horizon?

LF: I’m having a lot of fun exploring, experimenting. Recently I’ve been working on a project about climate. I keep coming back to the questions of how rural communities navigate modernity and how landscape shapes people into who they are.

PP: Finally, when does Frontcountry go on sale? And where can we buy a copy?

LF: The book was just published and is available for pre-order on the Nazraeli Press website. Copies will be available in stores and online in March. I will post more info on my website.

PP: Thanks for your time Lucas, and good luck with your future projects.

Hey Seoul Sistas: On Assignment for the Bachelor Season 18 Episode 4