If there are two things I love in life it’s cars and photography, and the thought of putting those two together sounds better to me than getting chocolate in my peanut butter! Now I don’t claim to be an amazing photographer nor hold any hopes of one day having my own photography tutorial DVD. However, I do like to talk about photography and more so, I like to get other people talking about it.

I have noticed over the past twelve months that there has been a huge growth in the interest in Automotive Photography. Without opening a huge can of worms, this is partly down to the availability of digital cameras and smartphones that out perform many of the leading camera brands best efforts of five years ago. This is a bit of a sweeping statement but car photography is also a very ‘cool’ pass-time. Think about it, if you have even the remotest interest in cars, why wouldn’t you want to surround yourself in the latest car-porn, or even better, take that achingly beautiful motor to a stunning location… And then take a picture of it! 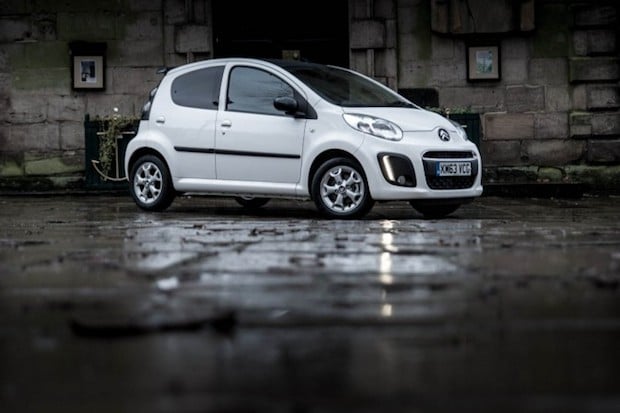 Sound like fun? Well of course it does. Though it’s not quite that simple. There are inherent problems with any kind of photography, I don’t shoot weddings because they are to high pressure to get ‘the shot’ over and over again. I don’t shoot animals because I have no interest in them and as for kids… No thanks. So, If you’re still interested, I have compiled a list of tips that I think would help anyone with their automotive photography, or any other type of photography. In fact, they are probably applicable in most areas of your life, read on…

To illustrate these points, I will be using a recent shoot that I did with the Citroen C1. It’s a small city car that probably won’t set too many peoples world on fire, but we still approached the shoot like we were shooting a McLaren P1… And then nearly set it on fire.

This is the first thing many other ‘photographers’ will tell you and I call bulls*** on it. Whereas I fully agree with the sentiment, I think it is completely wrong advise to be given as an amateur. The digital age has given everybody endless numbers of exposures and the ability to ‘spray and pray’. There is nothing particularly wrong with this, but it doesn’t challenge us to think about what we are shooting. With the C1, it would be easy to take a couple of hundred pictures and hope for the best. Even worse, it would be easy to think ‘it’s just a small car’ and not think at all and miss the point of the car. Rule number one, ‘think’ about what it is you are shooting. What purpose does it serve? Who is it targeted at? What environment is it built for? Start thinking about these points and then you will start to have a direction for your shoot. Only when you ‘know’ what you are shooting can you stop thinking and start shooting.

Fail to Plan, Plan to Fail…

Ahh, this old chestnut. As with any advice, if you find yourself hearing the same things over and over again, don’t discount it because there is probably some truth there. If we could nail down the Tim Wallaces’s, Webb Bland’s, Linhbergh’s of the world, I’m pretty sure this point would be fairly high on their lists too!

Try to think of a concept, storyboard the shoot if possible and scout locations prior to the shoot. It is possible to ‘wing it’ on the day and find good spots and I have done this many times; however, it does take a lot of pressure off when you know you’ve got good locations. On a recent shoot, I was about 100 shots in when a security guard stopped me and smiled contently as he watched me delete all of my excellent work as I had not gotten permission to shoot at the location first… Lesson learned. 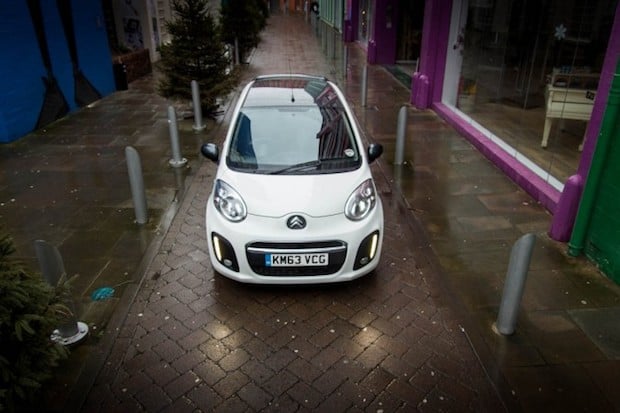 It goes without saying (but I’ll say it anyway) get the basics right. Charge you batteries the night before, check that you’ve got all the equipment that you think you will need and more. It is better to take too much equipment and not need it, than to take too little and wish you’d got that extra flash. The great thing about shooting cars is that they are great for carrying your gear in!

One of the biggest lessons I have learned to date is to slow down, take your time and concentrate on what you’re doing. I have had some great opportunities to shoot some beautiful cars but when I get home, I find myself deleting what I thought where the ‘keepers’ and going with shots that I never really liked. Why? Because I missed the focus point, or there was something in the background that I’d not spotted. With the C1, we had a full day to shoot and this really helps, but when time is an issue (and this will sound like completely the wrong thing to do!) take your time! Make sure you are nailing the shot because you won’t have time to move the car again and say ‘can we just go back to that last location’…

Have Heroes, But Find Your Own Path…

This one can really apply to anything you are passionate about: cooking, sports being in a band… It is great to have heroes, those that you aspire to be like and look up to, but don’t get hung up on trying to ‘be them.’ I could list hundreds of photographers that I admire, but I pretty much no longer visit 500px or Flickr because the quality of other peoples work makes me feel pretty low. By all means study other peoples work, but don’t beat yourself up about it. Remember, they started at the bottom too. I personally don’t think I have a ‘style.’ If anything, I slightly lean towards the dark, moody, more artistic style of shooting. Within Automotive Photography, there is a huge tendency to over-process and Photoshop the hell out of an image. This is great and it produces some incredible images (just look at the work of GF Williams for instance) but it is not something that appeals to me. I would rather get things right ‘in camera’ and then just play with levels in Lightroom. You have to find your own niche, don’t copy any one person’s style too much (do your research though, it never hurts to see what other are doing and how they do it!). People will always compare you to somebody else and say ‘oh, you tried to make it look like so and so…’ Ignore this, just keep following your own path and one day, before you even become aware of it, you will have found your niche.

This is both literal and metaphorical. If you are with the owner of a car, they will undoubtedly be passionate about it. Don’t forget, they have thrown their hard-earned money, long hours and more blood sweat and tears than you could possibly imagine into their garage-built baby. So talk to them about it, ask them what appeals to them, why they chose it, what their favorite parts of it are, and then shoot them! Take the C1, the Platinum edition that we had didn’t accidentally have a spoiler on the back, it was there for a purpose! Now this purpose was probably more to indicate that it is a ‘sportier’ model rather than to provide actual down-force, but again, it is there for a reason, so make sure it is in the shot. With all due respect, we knew that we would have to do something to draw attention to the C1. I love a bit of long-exposure photography and had experimented with steel wool in the past and though it would be great to get a huge spiral going behind a car. I had always imagined it would be a Ferrari F40, but I said to my editor Paul, ‘Why don’t we do it for the C1?′ He agreed. 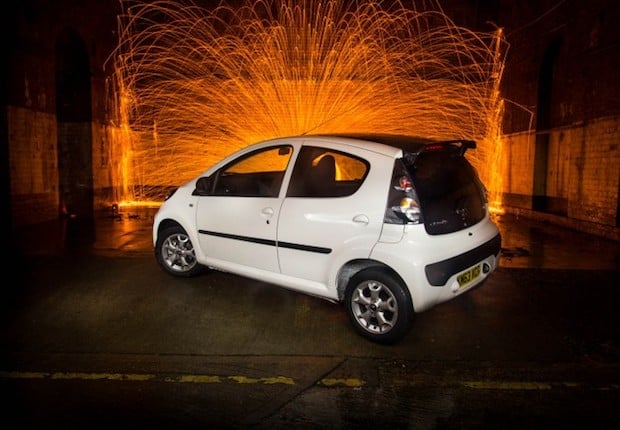 I formed a plan of how I would do it, found a location and set about organizing the shot. I chose a location in a quiet part of town to try to avoid unwanted attention. We knew that we were dealing with fire so we took all of the necessary precautions and had plenty of water and a first aid kit at hand. We chose a brick-built location free from flammables and did a test shot with the steel wool to get the correct exposure time etc.

We then set about lighting the car. This was done using a handheld LED strip light which we used to literally ‘paint’ the car with light. When we were happy that the we could combine the two, we went for it!

My trusty assistant (my girlfriend) kept watch for passers-by and small fires as I set the camera and went and found a cramped little spot behind the C1. My trusty editor Paul then started the exposure and proceeded to paint the car with the strip light. 15 Seconds later, you have the final image, all shot in one go. 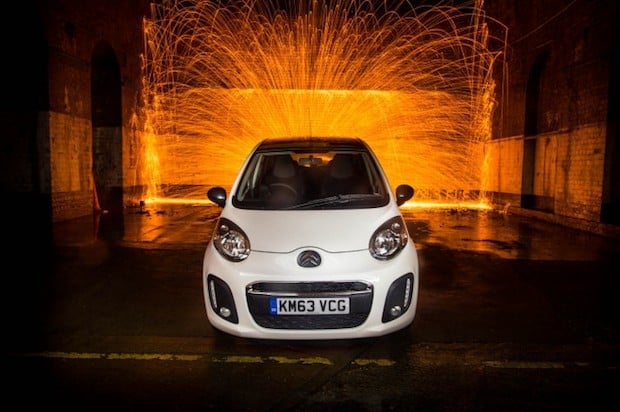 Now I have played a little bit with the levels and I can already hear readers shouting ‘the light on the car isn’t even’ and ‘you could have layered several exposures together in Photoshop!’ Which are great points, but I wanted to illustrate that with a bit of planning, research and patience, you can get decent results pretty much straight out of camera.

It is always going to be a stretch of the imagination to shoot a small city car like a million pound plus hypercar. But my argument is, why not? Every shoot that we undertake we should be striving to make it as good as possible, push our own limits and continually try to improve ourselves.

Your current shoot should always (at least try) to be better than your last! Shooting a C1 on a cold, rainy day in the middle of Birmingham may not sound fun, but it challenged me and I thoroughly enjoyed it! I hope that some of these tips help you and would love to hear your own tips, so please comment below and share your own experiences! Feel free to email me your images and we’ll share the best in future post on MotorVerso (email: [email protected]). Good luck and, most importantly, enjoy yourselves! About the Author: Ross Jukes is an amateur photographer from Birmingham, England with a passion for automotive photography (among other things). You can find more of his work on his Facebook page. This article was originally published on MotorVerso.