Is the Ladibird an iPhone case, a fully-functioning camera or a cleverly designed smartphone add-on? The answers, in no particular order, are yes, yes and yes. The upcoming device manages the increasingly difficult feat of pioneering a new and potentially useful category by turning an iPhone into a seriously capable portrait camera.

The sleek unit incorporates a 50mm f/1.8 prime lens and a large CMOS sensor into a package that easily slides over any iPhone. With an accompanying app, the iPhone essentially turns into a storage and transmission medium.

Developed by three University of Singapore graduates with a taste for photography and entrepreneurial efforts, the Ladibird is closing up its second round on crowdfunding site Indiegogo and expects to begin mass production in time for July 2014 delivery. For those who didn’t get in on the funding campaign, it will set you back about $300. 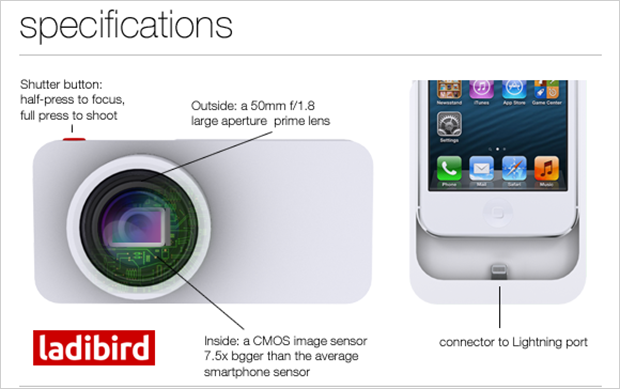 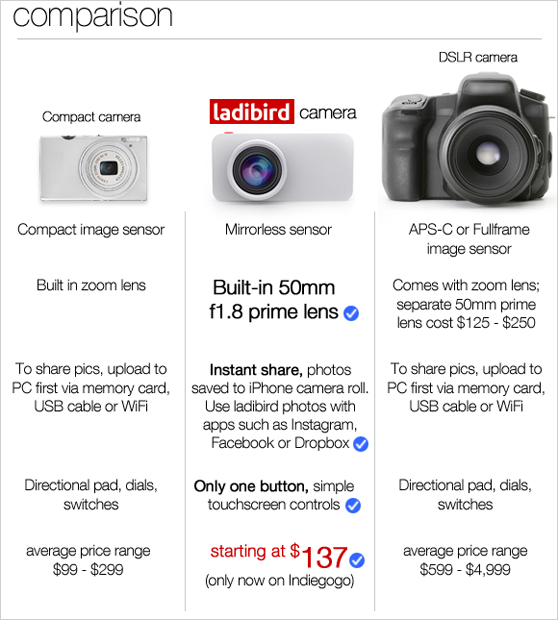 Prototypes of the device are being shown at CES this week and attracting plenty of attention. One significant point of obscurity remains, however: just how big is the sensor? Ladibird says it’s prohibited by NDA from disclosing the megapixel count now and the only descriptor offered is that the physical size is 7.5 times the dimension of the iPhone internal image sensor.

By our calculations, that puts it a fair bit south of MFT size, so decide for yourself how that gibes with the promise to produce “DSLR-quality portraits.”

Aside from that possible bit of marketing overreach, it’s hard not to be impressed with the idea, especially when compared with kludgier precursors.