Turns out you may not have to be stupid enough to post incriminating evidence on Instagram to get busted via photo in the near future. A pair of British researchers are working on a way to collect identifiable images from the reflections of people captured on a photo subject’s eyeball.

The theory — as explained in a paper recently published by psychologists Rob Jenkins (University of York) and Christine Kerr (University of Glasgow) — is that cameras are often seized in criminal investigations, and careful study of the shiny, nicely reflective surfaces of the eyeballs of those captured on camera could reveal new evidence; particularly the identity of the photographer and any bystanders. 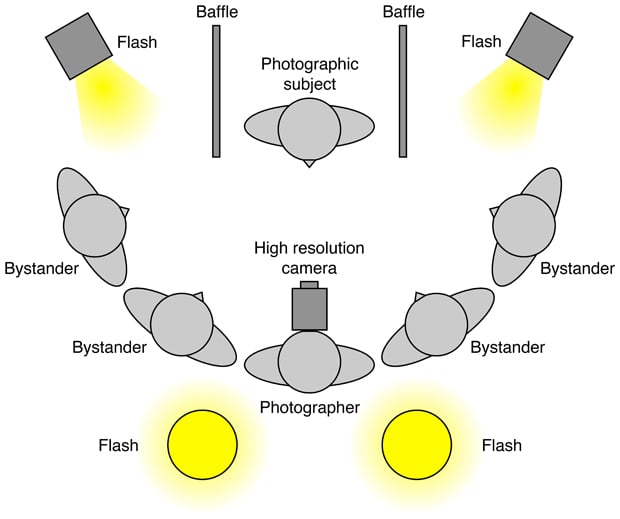 The researchers photographed eight subjects, each surrounded by three bystanders. Shots were captured on a Hasselblad H2D, at 3 feet away and illuminated by flashes with dishes reflectors. The captured images were zoomed in to focus on the subject’s eye, producing an image 27-36 pixels wide and 42-56 pixels high. After a little bicubic resampling and basic Photoshop adjustments, the pixelated images were presented to two groups of test subjects.

One group had to match the pixelated enlargements to studio portraits of the same people. Accuracy ranged from 71 to 84 percent, depending on how familiar the subject was with the person in the photograph.

The other group consisted only of people familiar with the bystanders pictured. They correctly identified the person in the pixelated image 90 percent of the time.

The authors acknowledge that few evidentiary photos are likely to match the conditions under which the study photos were taken (Although if anyone wants to start a program to outfit potential criminals with Hasselblads, I now declare myself an at-risk youth). But they note that camera sensors and imaging software are continually improving.

In fact, even crappy images may be valuable. “The extracted face images need not be of high quality in order to be identifiable,” according to the paper. “For this reason, obtaining optimal viewers — those who are familiar with the faces concerned — may be more important than obtaining optimal images.”

(via PLOS One via Los Angeles Times)

Report Claims Only Nikon, Canon and Sony Will Survive the Smartphone Revolution