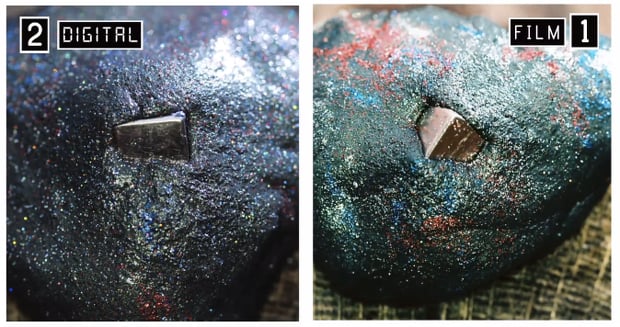 When it comes to the Film Vs. Digital debate, many people are fairly entrenched on one side or the other. But can you really tell the difference between RAW digital footage and film footage? What about when the digital footage is made to look like film using filters in post? PBS Digital Studios wants to put you to the test.

The comparison video was created by filmmaker Joey Shanks, who put a Canon 5D and a Canon 7E side by side and filmed the exact same footage using the same lens from the same angle. He then scanned all of the negatives in (a process that took as long as 4 minutes PER negative) and put the footage together in this head-to-head comparison video.

Here are a couple of GIFs that show the digital and film footage side-by-side:

Of course, identifying which is which is easy when there’s a label telling you the answer, so Shanks decided to keep the final clip secret. If you think you know which one is film and which is digital (or even if you don’t and just wanna give it your best guess) drop us a line in the comments here or on the original YouTube video with your answer.

Shanks will reveal the answer on December 26th, at which point we’ll update this post as well so you know if you were right. And in the meantime, feel free to get the classic film vs digital debate going in the comments based on the labeled footage.

Does one look consistently better than the other? Or is the standard on-the-fence answer (it depends on the subject) more appropriate?

THIS is How You Change a Lens Like a Pro: Sony Ad Shows Mid-Skydive Lens Change