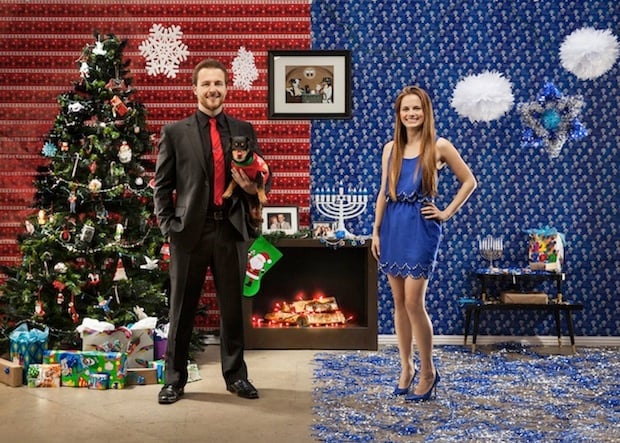 Say you and your girlfriend are both photographers. And say, also, that you’ve been together for four years and you’ve decided it’s time to send out your first Holiday card as a couple. There’s only one issue: you celebrate Christmas and she celebrates Hanukkah. What are two photographers to do?

Why, you turn the studio you work at into a creative half-Christmas half-Hanukkah scene and shoot a Holiday card so awesome the entire Internet takes notice, that’s what you do!

At least that’s what photographer Scott Burry and his girlfriend Dani decided to do, but we don’t think they realized that their fun Holiday card idea would go quite so viral. But viral it has gone, and so we got in touch with the couple to see if they could give us a little info on how this shoot came together.

Here’s what Scott had to say:

We shot it at the photo studio I work at, so the only money we spent was on some of the props. I shot it myself with the help of some great friends. We shot the entire image on a Sunday using cheap props and wrapping paper from a party store. It was a long day, but fortunately we have some really patient friends. Without them, we would not have been able to get it all together…

We really did it to have some fun with our family and friends. It shows that we both come from different backgrounds, but in the end, we celebrate the holiday season together with our families and enjoy the traditions on both sides. 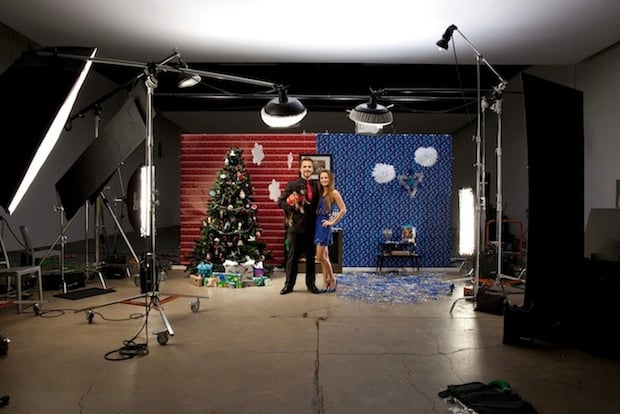 Of course, as it so often goes on the Internet, some people have decided to read a bit further into this card than Scott or Dani intended.

“Some people are talking about how we did this to make a point that christians and jews can live harmoniously together. That’s really not the case at all,” explains Scott. “We just wanted to have a bit of fun making a humorous card that was also relevant to our careers. Dani’s family accepted me into their jewish traditions right from the start. Same goes for my family sharing our christmas traditions with Dani.”

In the end, he’s just happy that so many people have gotten enjoyment out of their quirky idea — almost 2,000 upvotes and over 2,300 comments and counting on Reddit since he shared it yesterday. And yes, in case you’re wondering, Scott does intend to turn this into an annual tradition.

To learn more about Scott and browse through his professional portfolio, head over to his website by clicking here.

Image credits: Photograph by Scott Burry and used with permission.

The One Hand Snap: A Shutter Release that Allows for One-Handed DSLR Operation