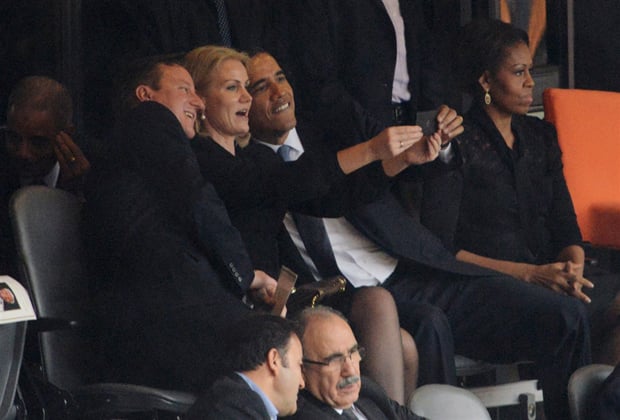 Last week’s memorial for Nelson Mandela had more than its share of media moments, from the fake sign language interpreter to the handshake heard ’round the world. But nothing caught on quite as tenaciously or curiously as what we’ll dub “The Great Obama Selfie Beatdown.”

It started when Helle Thorning-Schmidt, prime minister of Denmark, pulled out her phone to grab a selfie of her sitting with President Obama and British PM David Cameron. Roberto Schmidt, a photographer for Agence France Press, captured the curiously contemporary moment. And before you could say “meme,” the entire narrative of the event shifted.

Forget about the legacy of one of the most inspiring and influential figures of the past century. Was the selfie a colossal break of etiquette? Did it reveal shocking new levels of self-involvement? Was Michelle Obama as torqued by the whole thing as she looked?

Selfiesatfunerals, a tumblr blog that mainly chronicles teens exercising bad judgement, shut down. “Obama has taken a funeral selfie, so our work here is done,” explained the blog’s final post. “Thank you, world, and good night.”

Photographer Schmidt was appalled at what he hath wrought. “Why do people care about a selfie?” he asked the New Republic. “This is a sad reflection of our society.”

“The AFP team worked hard to display the reaction that South African people had for the passing of someone they consider as a father,” Schmidt continued on an AFP blog. “We moved about 500 pictures, trying to portray their true feelings, and this seemingly trivial image seems to have eclipsed much of this collective work.”

Then it was time to take apart the reaction to the reaction, with Ed Driscoll of PJ Media casting Schmidt’s remarks as part of a lamentable trend of media kowtowing to official power and labeling the photographer “a wannabe court eunuch ashamed that he made the most powerful man in the world look silly.”