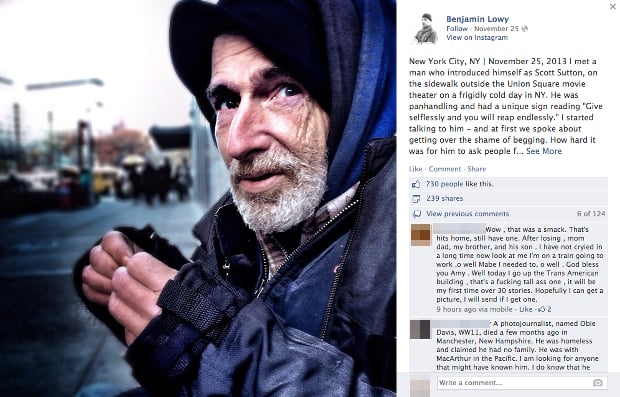 Photographers around the country are banding together to figure out the best way to help out a once-prominent photojournalist who has ended up homeless and panhandling on the streets of Manhattan.

Photojournalist Benjamin Lowy shared the story Monday on Facebook of how he started chatting with a panhandler near Union Square. Noticing the similarity of their footwear — sturdy combat boots common among Afghanistan soldiers and those who chronicle them — he realized they shared a profession.

The homeless man said he had been a combat photographer in the Balkans, but his life started to fall apart when his wife died of heart disease two years ago. “Well, you know what they say,” he told Lowy, “when it rains it pours, and here I am now. On the street. Begging.”

Lowy identified the man as Scott Sutton, and since his Facebook post, he’s been inundated with responses from photographers who recognize Sutton as a former colleague and mentor at the Archive Photos agency and a stand-out student at the Rochester Institute of Technology.

“He was an amazing printer, incredible photographer,” wrote one former co-worker commenting on Facebook. “I have so much to say about him that I don’t know where to start.”

Responses on Facebook have ranged from “Where do I send money?” to offers of camera equipment, counseling and even a house. And a number of “There but for the grace of God goes anyone in this business” comments.

“Currently we are all trying to figure out how to best help him,” wrote Lowy yesterday afternoon, “and I’ll be going back out today to try and find him.” If you’re interested in helping or if you’d like to follow the story along, head over to Lowy’s Facebook or directly to the original post by following the corresponding links.