Sometimes, taking a straight-on photograph is exactly what the situation calls for. But what about those moments when you want a more complete view? What happens when you want to capture everything around you, all at once, in a snapshot or video that is as interactive as Google’s Street View? Well, that’s when you reach for the Bublcam. 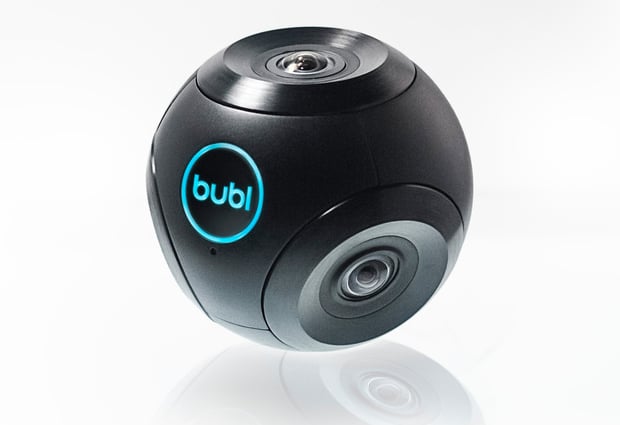 Bublcam is a new softball-sized (they call it baseball-sized… but we think it’s a bit bigger) camera that is taking the Internet by storm. It takes 360-degree snapshots and videos — even allowing users to stream video live via WiFi — at the press of a button.

All you as the viewer have to do is upload the footage into the company’s Android, iOS or PC software to interact with the photos or video in the same way that you would with a Street View photograph. If you’re wondering why we continue to compare the camera to Street View, it’s because Bublcam was invented by someone with a Street View pedigree. CEO and Founder Sean Ramsey once worked with a company called Immersive Media, who worked together with Google to create Street View.

Bublcam was born out of Ramsay’s dissatisfaction with the fact that 360-degree spherical image capture technology was only being used for mapping purposes. In the words of Bigweld from the animated movie Robots: “See a need, fill a need.”

What Ramsay and his team have come up with to fill that need is a 4-camera ball rig that arranges the cameras in a patent-pending tetrahedral design, overlapping images so nothing is left out of the shot when everything is stitched together.

And now that they have a production-ready prototype, they’ve embarked on a crowdfunding campaign to get Bublcam off the ground and into users’ hands. Or rather, we should say they’ve embarked on a wildly successful campaign, because with 36 days to go, the Bublcam has raised almost $156,000 CAD of their already lofty $100,000 goal.

Here’s their Kickstarter video and a couple of demos as well:

Getting your own jet black Bublcam will cost you $430 USD on the not-quite-earlybird special (only 106 of these left as of this writing). After that, the Kickstarter special is $525 USD, but that allows you to pick between silver, blue, red, yellow, white, or black — this pledge level also includes a mini tripod and a limited edition “exploded Bublcam” T-shirt.

Obviously they no longer need your help to make the Bublcam a reality, but they certainly still want it. So if you like what you see and you’re interested in “captur[ing] life in a Bubl” (their tagline), head over to the campaign page to learn more about the camera and put down your pledge. Backers will receive their cameras starting in May.

Number of Adobe Accounts Hacked Now Up to 150M, Check Yours

How to Jump Start Your Motivation