It’s hump day, and what better way to start the second half of the week than with a little bit of good old fashioned GoPro insanity… well, GoPro and Red Bull, which is a match made in action camera heaven.


The video shows the first person view that extreme mountain biker Kelly McGarry had during Red Bull’s annual “Red Bull Rampage” competition in Utah. From the moment his name is called to the moment he makes your heart stop by backflipping over a 72-foot canyon, the video will undoubtedly get your adrenaline pumping. 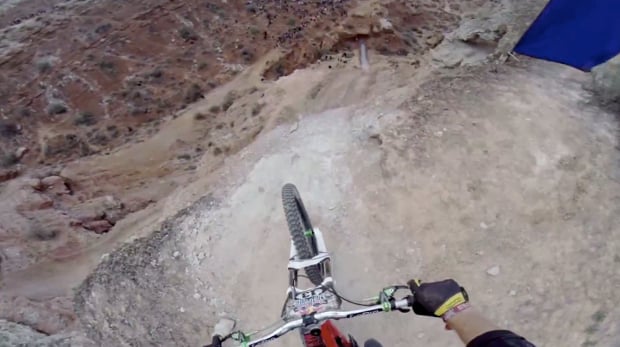 As you might expect, the whole thing was captured on one of GoPro’s new Hero3+ cameras, and if you’re not cringing, sweating and trying not to look away the entire time, then you’re a braver person than I.

But here’s the kicker. This epic bike run down a course that would have Chuck Norris wide-eyed earned McGarry… second place. Yep, apparently it take more than a back flip over a 72-foot canyon to clinch the gold at the Red Bull Rampage.

Check out the video at the top to start off your hump day with a little bit of vicarious sweating, and if you want to see more POV awesomeness, be sure to watch the recently released footage of Felix Baumgartner’s skydive from the edge of space.