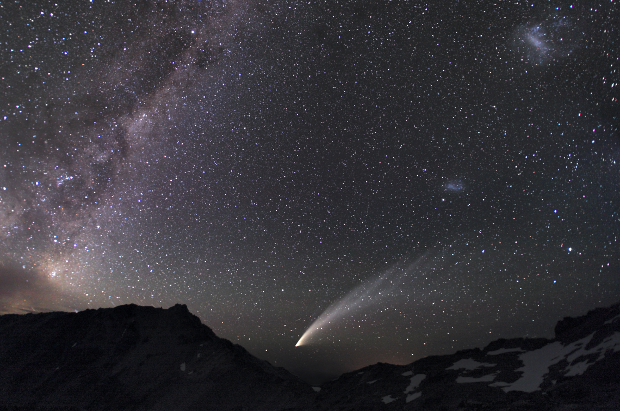 We’ve found reason to share Czech astrophotographer Miloslav Druckmüller‘s breathtaking work once before when we showed you his composite of a total solar eclipse. Now he’s back with another composite image that shows a nightscape the likes of which you’ve probably never seen before.

The beauty of this image is that, unlike his corona image we shared before, this is what you would have seen if you were standing next to him. Well, at least something very close to the high-res version, which you can find here.

In his own words:

This image is, from my point of view, very realistic and is very near to what I have in my mind with only one exception. The human vision has very low ability to see colors in low light conditions and therefore my sensation during the night was mostly B&W. The image was put together from 13 photographs Druckmüller took that night in the Patagonia, Argentina region. In all, the photograph covers a 100 x 100-degree angle of view with 7 of the images stitched together at the top and 6 at the bottom.

Obviously, our little resized version at the top doesn’t do it justice, so if you want to see it in all its glory and get some more info about the image from the man who shot it, be sure to head over to Druckmüller’s website by clicking here. Fair warning though… you probably won’t leave after looking at just the one image.

Image credits: Photograph by Miloslav Druckmüller and used with permission.

Behind the Scenes with ‘Dancers Among Us’ Photographer Jordan Matter